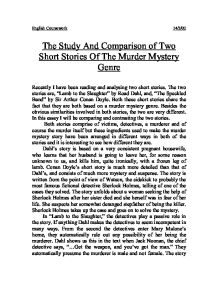 The Study And Comparison of Two Short Stories Of The Murder Mystery Genre - The two stories are, &quot;Lamb to the Slaughter&quot; by Road Dahl, and, &quot;The Speckled Band&quot; by Sir Arthur Conan Doyle.

English Coursework 14/3/02 The Study And Comparison of Two Short Stories Of The Murder Mystery Genre Recently I have been reading and analysing two short stories. The two stories are, "Lamb to the Slaughter" by Road Dahl, and, "The Speckled Band" by Sir Arthur Conan Doyle. Both these short stories share the fact that they are both based on a murder mystery genre. Besides the obvious similarities involved in both stories, the two are very different. In this essay I will be comparing and contrasting the two stories. Both stories comprise of victims, detectives, a murderer and of course the murder itself but these ingredients used to make the murder mystery story have been arranged in different ways in both of the stories and it is interesting to see how different they are. Dahl's story is based on a very consistent pregnant housewife, who learns that her husband is going to leave her, for some reason unknown to us, and kills him, quite ironically, with a frozen leg of lamb. Conan Doyle's short story is much more detailed than that of Dahl's, and consists of much more mystery and suspense. The story is written from the point of view of Watson, the sidekick to probably the most famous fictional detective Sherlock Holmes, telling of one of the cases they solved. The story unfolds about a woman seeking the help of Sherlock Holmes after her sister died and she herself was in fear of her life. She suspects her somewhat deranged stepfather of being the killer. Sherlock Holmes takes up the case and goes on to solve the mystery. ...read more.

Miss Stoner's sister was a victim to the foul ways of her stepfather, Dr Roylott. Miss Stoner again herself is a victim as it is Doctor Roylott's intention to kill her also. Miss Stoner first meets Mr Holmes in a state of terror as she is in fear of her life as she suspects Dr Roylott of killing her sister and attempting to kill her, but has no evidence to prove it. Miss Stoner says, "It is fear, Mr Holmes. It is terror." Dahl shows us how Miss Stoner feels by describing her, "...she was indeed in a pitiable state of agitation, her face all drawn and grey, with restless, frightened eyes, like those of some hunted animal. Her features and figure were those of a woman of thirty, but her hair was shot with premature grey, and her expression was weary and haggard." These lines let us experience the fear that she is feeling. The murderer in, "The Speckled Band" is truly a horrific character. Dahl builds up our emotions of anxiety and suspense when Dr Roylott bursts into Mr Holmes home. It is the way that Conan Doyle describes this man that really makes you sense the evilness of this character, and right from the first moment he appears in the story you can tell that he has had something to do with this devious act. Such a description would be, "A large face, seared with a thousand wrinkles, burned yellow with the sun, and marked with every evil passion, was turned from one to the other of us, while his deep-set, bile-shot eyes, and the high thin fleshless nose, gave him somewhat the resemblance to a fierce old bird of pray." ...read more.

Suspense plays a bit part in, "The Speckled Band," and Conan Doyle builds it up through the whole story. The main build up of suspense in the story is the way that Conan Doyle keeps us from knowing who is the killer and how he is killing his victims. We get the impression straight away that the murderer is Dr Roylott, but what really intrigued me was how he was killing his victims. This in comparison with, "Lamb to the Slaughter," is very different. Dahl lets us know straight away who the murderer was and what she did. It was a different type of story that did not rely on suspense. Whilst "The Speckled Band," is based on the detective work and the cracking of the case, "Lamb to the Slaughter," is based on this woman escaping the law and not getting caught. Both of the two stories had different effects on me. I did not enjoy reading, "Lamb to the Slaughter," because Dahl told us exactly what was going on and there was nothing left to the imagination. On the contrary, "The Speckled Band," did run away with my imagination and the combination of wits, cunning, evil and mystery make this a great murder mystery story. I found the story livelier and there was a great sense of anticipation, as I wanted to read on and on and find out exactly how Mr Holmes solved the case. Dahl's story was more focused on the murderer and the crime itself, whilst as Conan Doyle's story was based on the detective and his logical mind. Both are good crime stories and each have their own way of building up emotions in us. I hope to read more of Conan Doyle's work. ...read more.