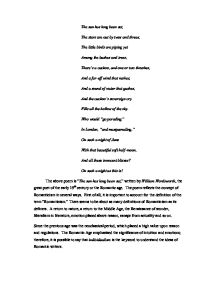 The Sun Has Long Been Set

The sun has long been set, The stars are out by twos and threes, The little birds are piping yet Among the bushes and trees; There's a cuckoo, and one or two thrushes, And a far-off wind that rushes, And a sound of water that gushes, And the cuckoo's sovereign cry Fills all the hollow of the sky. Who would "go parading" In London, "and masquerading," On such a night of June With that beautiful soft half-moon, And all these innocent blisses? On such a night as this is! The above poem is "The sun has long been set," written by William Wordsworth, the great poet of the early 19th century or the Romantic age. The poem reflects the concept of Romanticism in several ways. First of all, it is important to account for the definition of the term "Romanticism." ...read more.

It was the place enriched by lakes, mountains, streams and waterfalls, where he lived with his family. Thus, it is obvious that his poems were inspired by his love in the surrounding nature. In accordance with Wordsworth and other Romantics, whose attitude toward imagination is the very reproduction in man of the divine creativity, the poem "The sun has long been set" also underlines the idea. Since imagination in the Romantic's point of view is to turn into other times and places, almost every lines of this poem did so. As we could see that imageries are richly employed. For instance, the stars are out by twos and threes or with that beautiful soft half-moon are the image of sight, the little birds are piping yet, and a far-off wind that rushes and and a sound of water that gushes are the image of sound. ...read more.

However, some people might argue that the narrator does not seek for sympathy, indeed, due to the essence of Romanticism, he seeks for individuality. As mentioned earlier that individualism is the keyword to Romanticism, Wordsworth declared his standpoint to be individual or nonconformist through the last stanza of "The sun has long been set" as follows. In line 10-15, which he questioned "Who would "go parading" in London, "and masquerading," on such a night of June...," states a sense of rebellion against the principles and customs of the 18th century. While extravagant living and social life were esteemed by the neoclassical thoughts, the Romantics, especially Wordsworth preferred country life and the joy of solitude. When the poem reached its bottom line, "on such a night at this is!" it brings readers to a conclusion that the narrator, perhaps Wordsworth himself, refused to go either parading or masquerading but enjoyed living in his solitary life ever. ?? ?? ?? ?? ...read more.