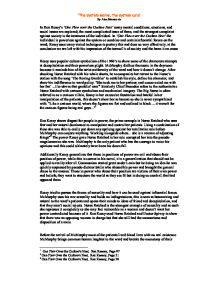 'The system works, the system calls' - the social issues in &quot;One Flew Over The Cuckoo's Nest&quot;

'The system works, the system calls' By Alex Stevanovic In Ken Kesey's 'One Flew over the Cuckoo Nest' many mental conditions, emotions, and social issues are explored; the most complicated issue of these, and the strongest complaint against society is the treatment of the individual. In 'One Flew over the Cuckoo Nest' the individual is powerless against the system or combine and certain influential forces on the ward; Kesey uses many varied techniques to portray this and does so very effectively, at the conclusion we are left with his impression of the turmoil's of society and the harm it an cause Kesey uses popular culture symbolism of the 1960's to show some of the characters attempts at decapitulation and their powerless plight. McMurphy dislikes the music in the dayroom because it reminds him of the strict uniformity of the ward and how it doesn't change. After shocking Nurse Ratched with his whale shorts, he accompanies her retreat to the Nurse's station with the song 'The Roving Gambler' to establish his style, define his character, and show his indifference to ward policy. ...read more.

Additionally Kesey generalizes that those in positions of power are evil and abuse their position of power, while this is correct in his novel, it is a generalization that should not be applied to reality after all Communism started great under Lenin but he being an idealist was quickly surpassed by pseudo-dictator Stalin who abused his power and brought the general chaos to the masses. Those in power who abuse their position are victims of their own power and beliefs; they want to structure the world as they see fit but in doing so crush all that had opposed them. Kesey tried to pursue the theme of sexuality and how it can be used against influential forces. McMurphy uses his raw sexuality and holds no indisgressions, this is seen as humanizing and natural to the ward's patients and opens their minds to ideas of friend and decapitulation, and that they aren't social rejects. Nurse Ratched is the strongest example of sexuality and as such she represses it completely as she may feel vulnerable as a woman and doesn't want her power contradicted because of it. ...read more.

In the hospital the men are expected to act within strict guidelines, but they must also suppress the urge to express themselves. They are limited to doing menial, repetitive and are never given the chance to choose their own pathways for physical, intellectual or emotional development. If they attempt to act other than how they are expected to they are punished by a barrage of physical abuse (EST and Lobotomies) but also like psychological torture. In much the same way this oppression is present in society. We are forcefully encouraged to develop our potential along certain accepted routes. If people deviate too far from selected routes they can expect some form of retribution and punishment in return. Kesey presents many different psychological, sociological and mental issues in his novel and explores them and their cross currents with little effort and ease. The conclusion of the novel brings us to one of the main points he was trying to make: People that don't conform either are forced to conform, or end up emotionally and physically scarred trying to avoid it; McMurphy is the prime example of the effect of this trait of society. ...read more.