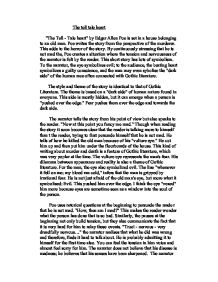 The tell tale heart "The Tell - Tale heart" by Edgar Allen Poe is set in a house belonging to an old man. Poe writes the story from the perspective of the murderer. This adds to the horror of the story. By continuously stressing that he is not mad the, Poe creates a situation where the tension and nervousness of the narrator is felt by the reader. This short story has lots of symbolism. To the narrator, the eye symbolizes evil; to the audience, the beating heart symbolizes a guilty conscience, and the man may even sybolise the "dark side" of the human race often connected with Gothic literature. The style and theme of the story is identical to that of Gothic Literature. The theme is based on a "dark side" of human nature found in everyone. ...read more.

For the man, the eye also symbolized evil. The line "whenever it fell on me; my blood ran cold," infers that the man is gripped by irrational fear. He is not just afraid of the old man's eye, but more what it symbolised: Evil. This pushed him over the edge. I think the eye "vexed" him more because eyes are sometime seen as a window into the soul of the person. Poe uses retorical questions at the beginning to persuade the reader that he is not mad. "How, then am I mad?" This makes the reader wonder what the person has done that is so bad. Similarly, the pauses at the beginning not only build tension, but they also communicate the fact that it is very hard for him to relay these events. ...read more.

One poses the ultimate burning retorical question of whether the man is mad or not, Madness being a theme of Gothic literature. The way he insists he is not suggests that he is hiding the truth, but if he were really mad then he would not suspect it. Maybe he is being truthful; he can't see why so many people think he is mad. The sound of the heart that no one else hears definitely infers that he is mad. Though the beating heart also sybolises his guilty conscience. It troubles him while the police are there. He starts to realise that what he did was wrong. But surely if he was mad he would have no conscience. He has become tangled up in the evil he hoped to get rid of. So the answer to the question is left up to you. Do you believe that every human has a dark side and that that this evil dark side is only revealed when the individual is "pushed over the edge?" ...read more.