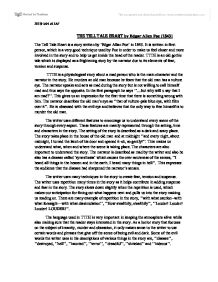 The Tell Tale Heart is a story written by Edgar Allan Poe in 1843. It is written in first person, which is a very good technique used by Poe in order to make us feel closer and more involved in the story

The Tell Tale Heart by Edgar Allen Poe [1843] The Tell Tale Heart is a story written by 'Edgar Allan Poe' in 1843. It is written in first person, which is a very good technique used by Poe in order to make us feel closer and more involved in the story and to help us get inside the head of the reader. TTTH is an old gothic tale which is displayed as a frightening story by the narrator due to its elements of fear, tension and suspense. TTTH is a physiological story about a mad person who is the main character and the narrator in the story. He murders an old man because he fears that the old man has a vulture eye. The narrator speaks and acts as mad during the story but is not willing to call himself mad and thus says the opposite. In the first paragraph he says ''....but why will u say that I am mad?''. This gives us an impression for the first time that there is something wrong with him. ...read more.

Louder! Louder! LOUDER!''. The language used in TTTH is very important in keeping the atmosphere alive while also making sure that the reader stays interested in the story. As a horror story that focuses on the subject of insanity, murder and obsession, it only makes sense to the writer to use certain words and phrases that give off the sense of being evil and dark. Some of the evil words the writer uses in his descriptions of various things in the story are, ''disease'', ''destroyed, ''h**l'', ''haunted'', ''terror'', ''dreadful'', ''shrieked'' and ''hideous''. These words and the many others that are used throughout the story have a very powerful effect, both in the story and on the reader. For instance, the first four examples create a strong sense of mental illness, which it seems is something the narrator suffers from. On the other hand, from the reader's point of view the last four words create an atmosphere that is filled with fear and horror, as these words are used strongly in description. ...read more.

The writer uses this to show the increased fear in the narrator's voice, as the narrator is under pressure. This is used to tell us that the narrator is starting to lose control upon himself. The policemen becomes suspicious on him and he is unable to remain calm and thus tells the about the murder. I think that, at the time that TTTH was written, this short story have been very effective as a first person horror narrative, as it explores many themes, like obsession and insanity. However, I do not feel that, in today's world, this story would have the same, powerful, effect. This is because things like insanity and murder is very common in this day and age, so those themes which are used in TTTH will not be as much as a scare or shock to us. However, I think that people nowadays would still be able to feel a part of the story, as the techniques used are foolproof and won't change their amount of effect no matter how many years go on. ?? ?? ?? ?? ZEESHAN ALTAF ...read more.