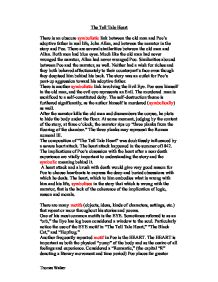 The Tell Tale Heart There is an obscure symbolistic link between the old man and Poe's adoptive father in real life, John Allan, and between the narrator in the story and Poe. There are several similarities between the old man and Allan. Both men had blue eyes. Much like the old man had never wronged the narrator, Allan had never wronged Poe. Similarities abound between Poe and the narrator, as well. Neither had a wish for riches and they both behaved affectionately to their counterpart's face even though they despised him behind his back. The story was an outlet for Poe's pent-up aggression toward his adoptive father. There is another symbolistic link involving the Evil Eye. Poe sees himself in the old man, and the evil eye represents an Evil. The murdered man is sacrificed to a self-constituted deity. The self-destruction theme is furthered significantly, as the author himself is murdered (symbolically) as well. After the narrator kills the old man and dismembers the corpse, he plots to hide the body under the floor. At some moment, judging by the context of the story, at three o'clock, the narrator rips up "three planks from the flooring of the chamber." The three planks may represent the Roman numeral III. The composition of "The Tell Tale Heart" was doubtlessly influenced by a severe heart attack. The heart attack happened in the summer of1842. The implications of Poe's obsession with the heart after a near death experience are vitally important to understanding the story and the symbolic meaning behind it. ...read more.

Atmosphere plays a big part in any classic horror story in order to paint a vivid picture to keep the reader interested. In "The Tell Tale Heart" there are many examples that create a menacing atmosphere. The fact that the narrator says that he arrives about midnight, Midnight being known as the witching hour, this creates a feeling or horror. Also it is "black as pitch with the thick darkness". The reason people are afraid of the dark is the fear of the unknown. You can't feeling scared that if the "old man" wakes you know that he will be killed. With noises like "hinges creaking" you are just waiting for the man to wake up which also creates tension. There is also "death-watchers in the wall." Another key factor for any horror story is Unpleasant Detail. It makes people repulse and creates a motion. In "The Tell Tale Heart" it is the description of the old man's eye "One of his eyes resembled that of a vulture- a pale blue eye, with a film over it." Also the murdering and dismembering of the old man's body "I dragged him to the floor and pulled the heavy bed over him... First of all I dismembered the corpse. I cut off the head and the arms and the legs." It is ironic that the narrator, who is from the beginning of the story considering himself to be the model of patience, seems to be bothered by the notion of time and the irrevocable direction that it takes. ...read more.

The classic films of the thirties and forties had interesting plots, good art direction and were well acted. The monsters in the films were normally not evil, but victims of circumstance. The creature was an animal defending his territory, the monster of Frankenstein was a child in the body of a behemoth abandoned by his creator, the Phantom and Quasimodo were deformed freaks shunned by society despite having souls filled with beauty, the Mummy was sentenced to eternal life because he used the forbidden Scroll of Thoth to bring his lover back to life and the Wolf Man was the ultimate victim - knowing his condition and unable to do a thing about it despite his best efforts. Only Dracula seemed to follow the path of evil on his own volition. There was also a lot of good in these 'monsters', and many children could identify with them being misunderstood and not really bad. Many kids accepted the classic monsters as friends, and this ignited the monster craze of the sixties. The films are timeless, and many do not seem all that dated even by today's standards. Modern horror, on the other hand, revels in being brutal, graphic and evil. Monsters like Freddie Krueger, Leatherface, Pinhead, Michael Myers, Hannibal Lector and Jason are evil and rotten to the core. These seemingly unstoppable madmen won't rest until everyone in their way is dead, in the most creative and imaginative ways. These films generally revolve around the battle of good versus evil- good usually wins in the end, but at a high cost and the survivors normally are annihilated in the sequel, proving that evil only has to win once. Thomas Walker ...read more.