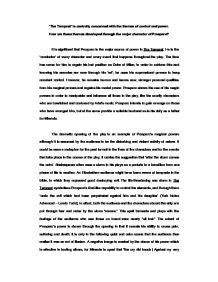 'The Tempest' is centrally concerned with the themes of control and power. How are these themes developed through the major character of Prospero?

'The Tempest' is centrally concerned with the themes of control and power. How are these themes developed through the major character of Prospero? It is significant that Prospero is the major source of power in The Tempest. He is the 'conductor' of every character and every event that happens throughout the play. The time has come for him to regain his lost position as Duke of Milan, in order to achieve this and knowing his enemies are near through his 'art'; he uses his supernatural powers to keep constant control. However, he remains human and learns new, stronger personal qualities from his magical powers and regains his mortal power. Prospero shows the use of his magic powers in order to manipulate and influence all those in the play, like the courtly characters who are bewitched and confused by Ariel's music. Prospero intends to gain revenge on those who have wronged him, but at the same provide a suitable husband as is his duty as a father for Miranda. The dramatic opening of the play is an example of Prospero's magical powers although it is assumed by the audience to be the disturbing and violent activity of nature. It could be seen a metaphor for the past turmoil in the lives of the characters and for the events that take place in the course of the play, it carries the suggestion that 'after the storm comes the calm'. ...read more.

His powerful magic allows him to cast his spells through his servant Ariel, who represents him and performs his commands, which is mainly shown throughout the play by Ariel's singing. As for the abusive power used on Caliban, Ferdinand, and the rest of the 'ship-wrecked', they are made to suffer the evil aspects of Prospero's power. Caliban depicts his torment as "apes, that mow and chatter" and "All wound with adders", whereas Ferdinand is temporarily enslaved with painful "kinds of baseness". Also hallucinations are created to arouse guilt within Alonso, Gonzalo and Antonio by provoking them with food. Ariel "From Milan did supplant good Prospero; Exposed unto the sea - which hath requit it - Him, and his innocent child; for which foul deed," But, the extent of Prospero's magic is limited to controlling nature, as he only hopes in the play that human nature will change. He cannot make Ferdinand and Miranda fall in love, but only bring them together and hope that they will do so. He also cannot cause his enemies to experience remorse and repentance for their deeds, shown as Sebastian and Antonio refuse to undergo a change of heart for their misdeeds. This is yet another weakness to Prospero's actual power in influencing the characters as he only causes things to happen around them, which is indirect manipulation and as shown results in some unaffected by his attempted control. ...read more.

Prospero confirms that "now my charms are all o'erthrown", in order to go back to his rightful place in Milan, where he will now perform his role properly, a contrast with what happened at the beginning when he abandoned his dukedom for magic. In a way, Prospero finally realises the damage of learning about the supernatural and the mistake he has made in taking up the practice in the first place. It can be suggested that Shakespeare's moral in this ending was in fact to stress to the Elizabethans the mishaps and risks that are taken by those who study mystical works and that all will be punished like Prospero or Sycorax. In an Elizabethan audience, many would have agreed with these ethics as magic and witchcraft were strictly forbidden and feared. After giving pardon to the other characters, Prospero admits he has also done wrong and places power over himself in the hands of the audience; "I must be confined by you". The symbol of the audience's "good hands" shows not only the appreciation of the play but gives them a pride in showing mercy and forgiveness. What is left of his magical power is used to "promise you calm seas, auspicious gales", an action to symbolise a positive and calm future. Prospero finally accepts again that "what strength I have's mine own", solely his human strength and power as duke. ...read more.