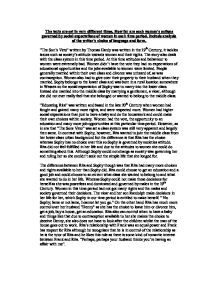 The texts are set in very different times. How far are each woman&amp;#146;s actions governed by social expectations of women in each time period. Include analysis of the writer&amp;#146;s choice of language and form.

The texts are set in very different times. How far are each woman's actions governed by social expectations of women in each time period. Include analysis of the writer's choice of language and form. "The Son's Veto" written by Thomas Hardy was written in the 19th Century, it tackles issues such as society's attitude towards women and their rights. The story also deals with the class system in this time period. At this time attitudes and behaviour to women were extremely bad. Women didn't have the vote they had no expectations of educational opportunities and the jobs available to women were limited. People generally married within their own class and divorce was unheard of, as was contraception. Women also had to give over their property to their husband when they married. Sophy belongs to the lower class and was born in a rural location somewhere in Wessex so the social expectation of Sophy was to marry into the lower class. Instead she married into the middle class by marrying a gentlemen, a vicar, although she did not ever really feel that she belonged or wanted to belong to the middle class. "Educating Rita" was written and based in the late 20th Century when women had fought and gained many more rights, and were respected more. ...read more.

" This Forster, honest to God he doesn't half get on my tits.... Good. You must show me the evidence." Sophy doesn't have any actual friends. This is because she married into the middle class, so she doesn't associate herself with the lower class but she doesn't fit into the middle class because of her rural lower class background, lack of education and due to her passive, shy character. This is also though because of societies attitude to women at this time being governed by the class system. In contrast to this Rita gains friends such as Trish and frank because of her outgoing nature and her appealing humorous character helps her to fit into the middle class. This is also due though to the fact that society does not govern women in terms of education. Also she realises she can make these choices more freely than Sophy can for instance and realises her mistakes about her choice of friends. For instance Trish as she realises that Trish is false and not a genuine nice person. "Its like Trish y'know me flatmate, I thought she was so cool an' together- I came home the other night an' she'd tried to top herself." " The Sons Veto" is written in the form of a short story. ...read more.

Sophy was also governed due to her weak character and arguably if Rita had been in Sophy's time period she may have been able to be dominated less by males decisions such as the vicar and Randolph. Rita on the other hand has not really been governed by society partly due to the time period she lives in as she has many more rights for women. Also this is partly due to the fact that Rita has a stronger character and is able to make her own choices and not be dominated by peoples decisions such as Denny. The text that appeals to me more is "Educating Rita" this is because I can relate more to this story as it is set in my sort of era and I can relate with the issues brought up within the play. This text appeals to me more as it has a less serious like the sombre story and gives a more humorous appeal to it with the character of Rita injecting humour into the play. Also you get to know the psychology of the characters better than in "The Sons Veto" thus you can relate to them more. Finally "Educating Rita" appeals to me more as I prefer the play format to the short story and also in the end of "Educating Rita" it gives a positive outcome of Rita finding herself. ...read more.