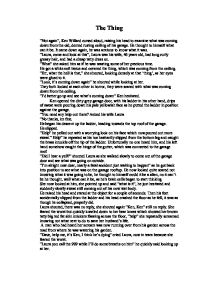 The Thing "Not again", Ken Willard cursed aloud, raising his head to examine what was coming down from the old, dented rusting ceiling of his garage. He thought to himself what can it be. It came down again, he was anxious to know what it was. "Laura, come and look at this", Laura was his wife, 46 years old, had long curly greasy hair, and had a cheap tatty dress on. "What" she asked him as if he was wasting some of her precious time. He got a white soft tissue and covered the thing, which was coming from the ceiling. "Err, what the h**l is that," she shouted, looking densely at that 'thing', as her eyes were glued to it. "Look, it's coming down again" he shouted while looking at her. They both looked at each other in horror, they were scared with what was coming down from the ceiling. "I'd better go up and see what's coming down" Ken hesitated. Ken opened the dirty grey garage door, with his ladder in his other hand, drips of sweat were pouring down his pale yellowish face as he putted the ladder in position against the garage. "You need any help out there? ...read more.

But Ken knew he wasn't going to follow the paramedics, he had other things on his mind. The paramedics left and for the spectators the excitement was over and they jetted of home which left Ken and Laura talking: "I never collapsed, did I" he sweetly asked his much beloved wife who nodded her head instantly, then he began to explain his procedure which he'd supposed to do earlier, suddenly he picked up his ladder and held it in position, he began thinking again what the h**l was on top of his garage, some strange thing perhaps he suggested to himself, now he positioned himself against the ladder, this time firmly gripping it tight with both hands. "Should I just hold it incase anything else happens?" asked his wife just as a necessary precaution "No" he said quite fastely as he was determined to see what that thing was on top of his nice big brown-bricked garaged, he looked up and signed out the ok sign to his wife. "I'm ready to go up Laura" he said, you could now tell that he was scared by the sweat and the looks on his face, she was anxious and scared too, she knew something was up there. ...read more.

now passed it's time, rats were now somehow alive, some awake and some waking up, were now eating away the motorbike with all their might, eating the exhaust pipe, everything. Dogs from other resident's houses where now coming in to the garage to join in the weird fun, about 2 shepherd dogs were destroyed the whole thing. But suddenly Ken lost his footing on the top of the garage and fell threw the garage, but with an instant he held on to the top metal of the garage and he has holding on for his dear life, the shepherd dogs were faeces just underneath him, ready to eat Ken, Ken was now covered in that messy blood, he's hand was falling off the hinges. "NO" she shouted as he felt his time was just about to go, he fell and landed on the two shepherd dogs, who fell on the motorbike, which landed on the awful b****y mess, which and, where there was a matchstick (the motorbike was all gassy and the flammable petrol oil), the whole garage blew out in an explosion "BANG", THE WHOLE WORLD shock, one of the dogs flew out into the air and crash landed on a car bonnet with people inside the car. Everyone screamed, Laura collapsed and Ken was left fighting for his life. ...read more.