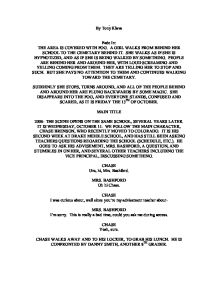 the THIRTEENTH DAY By Tony Klava Fade In: THE AREA IS COVERED WITH FOG. A GIRL WALKS FROM BEHIND HER SCHOOL TO THE CEMETARY BEHIND IT. SHE WALKS AS IF SHE IS HYPNOTIZED, AND AS IF SHE IS BEING WALKED BY SOMETHING. PEOPLE ARE BEHIND HER AND AROUND HER, WITH LOUD SCREAMING AND YELLING COMING FROM THEM. THEY ARE TELLING HER TO STOP AND SUCH. BUT SHE PAYS NO ATTENTION TO THEM AND CONTINUES WALKING TOWARD THE CEMETARY. SUDDENLY SHE STOPS, TURNS AROUND, AND ALL OF THE PEOPLE BEHIND AND AROUND HER ARE FLUNG BACKWARDS BY SOME MAGIC. SHE DISAPPEARS INTO THE FOG, AND EVERYONE STANDS, CONFUSED AND SCARED, AS IT IS FRIDAY THE 13TH OF OCTOBER. MAIN TITLE 2006- THE SCENE OPENS ON THE SAME SCHOOL, SEVERAL YEARS LATER. IT IS WEDNESDAY, OCTOBER 11. WE FOLLOW THE MAIN CHARACTER, CHASE BRENSON, WHO RECENTLY MOVED TO COLORADO. IT IS HIS SECOND WEEK AT DRAKE MIDDLE SCHOOL, AND HAS STILL BEEN ASKING TEACHERS QUESTIONS REGARDING THE SCHOOL (SCHEDULE, ETC.). HE GOES TO ASK HIS ADVISEMENT, MRS. BASHFORD, A QUESTION, AND STUMBLES IN ON HER, AND SEVERAL OTHER TEACHERS INCLUDING THE VICE PRINCIPAL, DISCUSSING SOMETHING. CHASE Um, hi, Mrs. Bashford. MRS. BASHFORD Oh hi Chase. CHASE I was curious about, well since you're my advisement teacher about- MRS. BASHFORD I'm sorry. This is really a bad time, could you ask me during access. CHASE Yeah, sure. CHASE WALKS AWAY AND TO HIS LOCKER, TO GRAB HIS LUNCH. HE IS CONFRONTED BY DANNY SMITH, ANOTHER 8TH GRADER. DANNY So, I hear you're new. CHASE Yeah? DANNY Name's Danny. Danny Smith. Hey, you wanna sit with us at lunch. ...read more.

DANNY Alright, so there was a threatening note. ROSIE And then message on the whiteboard Danny. CHASE No, this morning I was gonna watch the news when- INTERCOM Chase Brenson, please report to the auditorium, Chase Brenson to the auditorium. THE THREE LOOK AT EACH OTHER IN CURIOUSITY CHASE See ya. HE STANDS UP AND WALKS TO THE AUDITORIUM. CHASE OPENS THE DOORS AND THEY ARE IMMEDIATELY SHUT (NOT BY HIM). CHASE Hello? I was called down here? Is anyone here? HIS ATTENTION IS DRIVEN TOWARDS A LIGHT ON THE CEILING. IT IS SWINGING BACK AND FORTH. IT LIGHTS THE STAGE, AND HE SEES A GIRL STANDING ALONE. THERE IS A FLASH AND THE GIRL IS IN FRONT OF HIM. GIRL Hello Chase. CHASE Who are you? GIRL I'm the Ghost. I sent you the letters, and wrote the message on the whiteboard. CHASE And the clip? GIRL That too. CHASE Why? You come every Friday the 13th? Is that what the teachers are so quiet about? GIRL Yes, it is. GIRL HAS BEEN MOVING AROUND THE AUDITORIUM SPONTANEOUSLY FOR THE LAST FEW MINUTES GIRL They're concerned. They don't know what happened to that girl in 2000. Or back in '78. Every six years since construction of the school began in the early 1960s I've come on the Friday the 13th. CHASE But why? What did they do to you? GIRL There's a bit more to it than you know, Chase. You've been here two weeks, I've been here forty years. You see, my family once owned this land, and it was also Native American land. But we were forced to sell. Why? SHE MOVES AGAIN GIRL It remained unknown to me why. ...read more.

Don't let her control you! CHASE TURNS TO FACE THEM AND THE GROUP IS FLUNG BACKWARDS. HE CONTINUES WALKING TO THE CEMETERY. DANNY MOVES IN FRONT OF HIM AND STOPS. DANNY Chase, don't do this. Don't. CHASE Get away from me. DANNY IS FLUNG TO THE GROUND. HE IS THEN TORTURED AND LEFT BY CHASE. HE KEEPS WALKING TOWARDS THE CEMETERY. ROSIE LOOKS UP AND SEES THE LITTLE GIRL. ROSIE What do you want? What's this going to solve. GIRL You fool! I've crossed two worlds for vengeance. But maybe you're right. SUDDENLY, DANNY IS RELEASED FROM THE CONTROL OF THE GHOST. HE FALLS TO THE GROUND. EVERYONE RUNS TOWARD HIM. DANNY He's not waking up. ROSIE SLOWLY STANDS UP, HYPNOTIZED. DANNY Rosie? ROSIE?! GIRL Too bad about you're Sister Danny. ROSIE WALKS TOWARD CEMETERY. CHASE WAKES UP. CHASE What's happening? DANNY The ghost has taken control of Rosie. There's no reasoning with the girl. What do we do? CHASE STANDS UP AND WOBBLES A BIT. CHASE I feel strange. But I think I have an idea. CHASE WALKS TO ROSIE. CHASE Ghost girl. THE GIRL APPEARS IN FRONT OF HIM. GIRL I could still always use you as my victim. CHASE THROWS A PUNCH AT HER, BUT IT GOES THROUGH HER. GIRL I'm a ghost, Chase. Don't you learn? CHASE I have. ROSIE! ROSIE TURNS TO CHASE. SHE MOVES HER HANDS UP AND USES THE SAME MAGIC TO DESTROY OTHERS. BECAUSE THE GHOST IS IN FRONT OF CHASE, IT HITS HER. THE GIRL SCREAMS AND DISAPPEARS. ROSIE FAINTS. CHASE It's over guys. It's over. CAMERA PANS OUT, AND FADES OUT. SCENE: THREE MONTHS LATER. CHASE IS WALKING THROUGH THE HALLS DURING PASSING PERIOD. HE WALKS BY THE AUDTORIUM, THE DOORS ARE OPEN. HE LOOKS UP AT THE CEILING AND SEES THE LIGHT SWAYING BACK AND FORTH. BLACKOUT. END CREDITS. THE END ...read more.