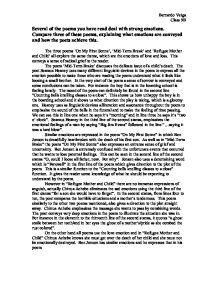 The three poems 'On My First Sonne', 'Mid-Term Break' and 'Refugee Mother and Child' all explore the same theme, which are the emotions of love and loss. This conveys a sense of radical grief to the reader.

Several of the poems you have read deal with strong emotions. Compare three of these poems, explaining what emotions are conveyed and how the poets achieve this. The three poems 'On My First Sonne', 'Mid-Term Break' and 'Refugee Mother and Child' all explore the same theme, which are the emotions of love and loss. This conveys a sense of radical grief to the reader. The poem 'Mid-Term Brake' discusses the delicate issue of a child's death. The poet Seamus Heaney uses many different linguistic devices in the poem to express all the emotion possible to make those who are reading the poem understand what it feels like loosing a small brother. ...read more.

Seamus Heaney in the third line of the second stanza, emphasizes the emotional feelings of a man by saying "Big Jim Evans" followed in the line "...saying it was a hard blow". Similar emotions are expressed in the poem "On My First Sonne" in which Ben Jonson is dreadfully heartbroken with the death of his first son. As well as in "Mid-Term Brake" the poem "On My First Sonne" also expresses an extreme sense of grief and uncertainty. Ben Jonson is extremely confused with the unfortunate events that occurred that he wants to lose paternal feelings. This can be seen in the second line of the second stanza "O, could I loose all father, now. ...read more.

This poem similarly to the other two poems mentioned, also gives a direction to the plot straight away. Chinua Achebe emphasizes the message she wants to pass by combining words. The poet conveys very deep emotions in the poem to illustrate the situation she was in. For instance in the eleventh to the thirteenth line of the second stanza, it quotes "a ghost smile between her teeth/and in her eyes the ghost of a mother's/pride as she combed the rust colored". On the other hand all poems use the love emotion and in "Refugee Mother and Child" Chinua Achebe knows she must get over the death of her child and she must not be emotionally destroyed. Ben Jonson has similar emotions and he expresses that in his poem. ?? ?? ?? ?? Bernardo Veiga Class 9B ...read more.

This question asks candidate to compare other Post-1914 poetry with Seamus Heaney's 'Mid-Term Break'. The candidate has chosen wisely 'On My First Sonne' by Ben Jonson and 'Refugee Mother and Child' by China Achebe, though very few analytical points are ...

This question asks candidate to compare other Post-1914 poetry with Seamus Heaney's 'Mid-Term Break'. The candidate has chosen wisely 'On My First Sonne' by Ben Jonson and 'Refugee Mother and Child' by China Achebe, though very few analytical points are made and full explored. It feels as though the candidate has taken the poems' emotions at face value and not considered how the poets achieve these emotions, although there is a little evidence of contextual appreciation in their analysis on 'Mid-Term Break'. The focus overall is somewhat obscured.

The candidate shows an ability to understand the emotions of the poems, but very rarely delves deeper than face value when it comes to understanding why the poems are so emotive, and to what lengths the poets go to in order to achieve that effect. Candidate must be appropriately armed with an array of evaluative points that they can make with regard to each poem, showing that they have the ability to comment on structure, imagery, language and connotations of the poems.
This candidate hasn't done such, but they have shown an attempt to. Where they infrequently try to explain the effect of a certain phrase, their quotation skills are clunky and messy, and often quote whole lines of stanzas rather than honing in on the finer details of why a certain word was chosen over another. Paying the attention to detail in terms of precise quotations of specific words is imperative for any candidate hoping to achieve a high grade. For example, this essay quotes "Counting bells knelling classes to a close" from 'Mid-Term Break', and not only there explanation poor and undeveloped, they should quote only "bell knelling", or simply "knelling" commenting on the word "knelling" which is used as an indicator of a funeral or recent death. There are sinister connotation of a knelling bell in a church steeple, creating a sense of discomfort and unsettlement in the readers.

The Quality of Written Communication is average. There are a few syntactical errors, leading to clumsily phrased sentences that feature too many conjunctions and should therefore be split into separate sentences, and there are typing errors occasionally dotted about, which should be seen to before submission with a proof-read and spell-check.