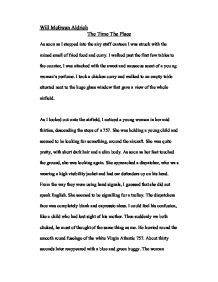 The Time The Place

Will McEwan Aldrich The Time The Place As soon as I stepped into the airy staff canteen I was struck with the mixed smell of fried food and curry. I walked past the first few tables to the counter, I was attacked with the sweet and nauseous scent of a young woman's perfume. I took a chicken curry and walked to an empty table situated next to the huge glass window that gave a view of the whole airfield. As I looked out onto the airfield, I noticed a young woman in her mid thirties, descending the steps of a 757. She was holding a young child and seemed to be looking for something, around the aircraft. She was quite pretty, with short dark hair and a slim body. As soon as her feet touched the ground, she was looking again. ...read more.

Suddenly all hell broke loose. A shiny black Labrador flew out of the loading door and landed on the tarmac with a slight bounce on its hocks. The dog handler, who was on the ground, waiting to take the animals into quarantine, saw the dog and immediately took up chase. I couldn't help but imagine to myself what the effect would be if the dog got stuck into an aircraft engine. The poor animal would be shredded up into mince meat. Loaders jumped out of the plane and tried to assist the dog handler in catching the by new, petrified animal. I chuckled to myself, at the site of five over weight middle-aged men running around flapping their arms in a desperate attempt to catch the animal. Then, as quickly as it had started, the whole saga was over. The dog handler had caught the Labrador with his extended leash. ...read more.

The steps were in place and the only thing missing was the aircraft. Suddenly a British Airways 747 appeared out of nowhere. It seemed to take the ground crew by surprise, and they all quickly scattered into position. As soon as the aircraft was static, the step driver manoeuvred the covered extension into position over the aircraft door. About thirty seconds later, one by one politicians started to descend the stairs onto the red carpet. Behind the press barrier came flashes, and arms grasping tape recorders were thrust over the barriers. As the politicians entered the marquee I noticed something new. There was a doorway that led into the V.I.P lounge. As with most politicians, they did not stay in the public eye for long. They had soon all entered the V.I.P lounge out of view. I looked at my watch and saw it was time for me to be getting back. I left the now, not so busy canteen and headed back to my office. ...read more.