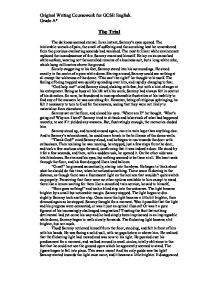 The Trial The darkness seemed eternal. In an instant, Sammy's eyes opened. The intolerable wrench of pain, the smell of suffering and the scorching heat he remembered from the previous everlasting seconds had vanished. The most brilliant white environment replaced the incandescence of fire. Sammy examined himself. He lay on an unmarked white surface, wearing not the scorched remains of a business suit, but a long white robe, which hung millimetres above the ground. Slowly staggering to his feet, Sammy stared into his surroundings. He stood exactly in the centre of a pure white dome. Staring around, Sammy could see nothing at all except the whiteness of the dome. 'This can't be right!' he thought to himself. The feeling of being trapped was quickly spreading over him, and rapidly changing to fear. "God help me!" cried Sammy aloud, shaking with fear, but with a hint of anger at his entrapment. Being so busy all his life with his work, Sammy had always felt in control of his direction. So now, he foundered in incomprehensible frustration at his inability to find any of the answers he was searching for. However, being of religious upbringing, he felt it necessary to turn to God for the answers, seeing that they were not likely to materialise from elsewhere. Sammy sat on the floor, and closed his eyes. 'Where am I?' he thought. 'What's going on? ...read more.

How did I get here?" The light faded from the man's hands and the room itself began to light up. Calmly, the man replied "Greetings, my friend. You must be Samuel Jackson. You were a tough one. Though may I congratulate you on your swift arrival. You found the second trial hard, but you came through strongly in the end". "What!" Sammy cried, understanding nothing of what the man was saying to him. "Have you any idea as to why you are here?" asked the man in an astonished tone. "Can you not remember what happened before you arrived here?" Sammy looked at the floor silently. He had thought about that, but he had paid no real attention to that at all. He had been more worried about getting away from his predicament. "I see," the man said. "Well I will try to keep this simple, my child, as it may be hard for you to accept." He paused, took a deep breath, and continued in a measured tone. "You are Sammy Jackson. You were a businessman for ELK Business Solutions. You were on your way to a meeting at the Hammersmith Conference Centre with the C.E.O. of IBM, to discuss a possible merger that would have landed you a �3.6million personal bonus." "I remember!" exclaimed Sammy. He began to relive the memory in his mind. "I was in the car on the '66. ...read more.

As the cloud cleared, he saw a huge gold throne. As he approached, he saw a man with the most beautiful crown upon his head. The man was smiling at Sammy. "Congratulations Sammy," said the man. "You have proved you are worthy of eternal salvation, and my Father has sent me to welcome you into his Kingdom of Happiness". "Was that my trial?" asked Sammy in bewilderment. "To overcome my fear and survive?" "Fear is the gift of the Devil," said the man. "You have rid yourself of the demons of sin and fear. That is how you retrieved the key". "The ball is the key?" "And there are the gates," said the man, gesturing to his left. Sammy saw the tallest set of pearly gates he had ever seen in his life. Turning from the man, who followed behind him, he walked towards the gates, the key held before him. The gates opened for him automatically, and he was greeted by the most beautiful singing of angels he had ever heard. Then the man cried to them all, "Tonight we celebrate! For today, a new man is born into our league of angels". And Sammy looked into the distance, and saw a table piled high with food. All the trials of his life, and even his trial in death had led him to this point. And now he was sure that he would be able to enjoy eternal happiness in the security and love of God's Heavenly Kingdom. Original Writing Coursework for GCSE English. Grade A* ...read more.