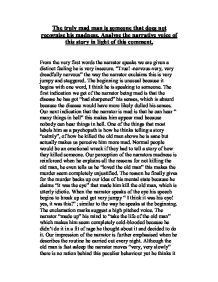 The truly mad man is someone that does not recognise his madness. Analyse the narrative voice of this story in light of this comment.

The truly mad man is someone that does not recognise his madness. Analyse the narrative voice of this story in light of this comment. From the very first words the narrator speaks we are given a distinct feeling he is very insecure. "True! -nervous-very, very dreadfully nervous" the way the narrator exclaims this is very jumpy and staggered. The beginning is unusual because it begins with one word, I think he is speaking to someone. The first indication we get of the narrator being mad is that the disease he has got "had sharpened" his senses, which is absurd because the disease would have more likely dulled his senses. Our next indication that the narrator is mad is that he can hear " many things in h**l" this makes him appear mad because nobody can hear things in h**l. One of the things that most labels him as a psychopath is how he thinks telling a story "calmly", of how he killed the old man shows he is sane but actually makes us perceive him more mad. ...read more.

He "chuckled at the idea" that the old man does not know what he is doing, I find this sick and s******c how he finds it funny how he can fool a vulnerable, half-blind, asleep, old man this makes him seem very mad because he is proud of this. We are again given an impression of the narrator being mad when his finger slips on the tin fastening of the lantern. Even though the old man springs awake in bed the narrator does not "move a muscle" "For a whole hour" there is something very inhuman about being able to not move for a whole hour. Something else very inhuman is how quiet the narrator kept; he was so quiet that he could" hear the death watches in the wall". The old man was not the only terrified person in the room as the narrator said he knew the sound of terror well because he's afraid. The narrator is terrified of the eye. The reference to the spider links back to when the old man first heard the noise, because the narrator kept completely still and quiet waiting for his moment to strike just like a spider does. ...read more.

"die!-and-now-again!" the sentence structure has all broken up again with dashes and lots of exclamation marks showing his hysteria. Whilst given us a clear sense that the narrator is mad, Poe also portrays how the narrator believes he is not mad at the same time. One of the most obvious indications that makes us think the narrator believes is not mad is, the straight forward denial of being mad. The narrator does not know why they "will say" he is mad. The narrator also thinks that killing the old man was clever and cunning, so he thinks he cannot be mad because "Madmen know nothing". At no point in the story does the narrator think that anything he had done could be slightly strange. We learn the most about the narrator in the first three paragraphs. I have realised that that the further apart our perceptions grow, the narrator and I, the more I think he's mad. As he tells of how great and clever the murder of the old man was; the more I think that he is mad and killing the old man was brutal and cold-blooded. Andrew Cannan ...read more.