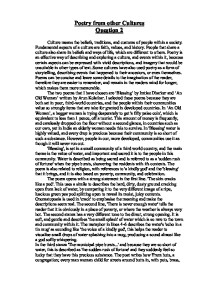 The two poems that I have chosen to analyse are 'Blessing' by Imtiaz Dharker and 'An Old Woman' written by Arun Kolatkar.

Poetry from other Cultures Question 2 Culture means the beliefs, traditions, and customs of people within a society. Fundamental aspects of a culture are faith, values, and history. People that share a culture also share its beliefs and ways of life, which are different to others. Poetry is an effective way of describing and exploring a culture, and events within it, because certain aspects can be expressed with vivid descriptions, and imagery that would be unsuitable in other types of text. Some cultures have also used poetry as a form of storytelling, describing events that happened to their ancestors, or even themselves. Poems can be concise and leave some details to the imagination of the reader, therefore they are easier to remember, and remain in the readers mind for longer, which makes them more memorable. The two poems that I have chosen are 'Blessing' by Imtiaz Dharker and 'An Old Woman' written by Arun Kolatkar. I selected these poems because they are both set in poor, third-world countries, and the people within their communities value so strongly items that are take for granted in developed countries. In 'An Old Woman', a beggar woman is trying desperately to get 'a fifty paise coin', which is equivalent to less than 1 pence, off a tourist. ...read more.

Assonance is then used on the final two lines of the poem, 'as the blessing sings over their small bones' this gives the poem a soft and serene ending because the repeated 's' is a delicate sound. Dharker conveys a distinct sense of community in the poem. She does this by using phrases, and words, such as 'the municipal pipe bursts', showing that, not only is the community poor and can only afford one water pump, but also the whole town has to share the small amount that they have. The town's people are also referred to as 'a congregation' which suggests that they are joined together with one common purpose-to give thanks for the water they have, and to help save it, and let none go to waste. It also suggests that there is closeness felt between them, just like when a congregation goes to church. This sense of a close community has been conveyed again on lines 12-13, 'Every man woman child...' This shows how every person in the town is working together to collect the precious water. The second poem 'An Old Woman' by Arun Kolatkar was chosen because it is similar in setting and themes to the 'Blessing'. ...read more.

No one is more important than anyone else, and they are all needed to help gather the precious water that they value so highly. Despite the fact that the poem is set in a poverty-stricken country, where "there is never enough water", the friendship shared by the villagers makes the reader feel as though they are content and happy with the life that they live. However, in 'An Old Woman' this impression is not given. The beggar does not appear to be content with her way of life and is worn and tired as a result of it. I think her discontentment is conveyed in line 20-21 "bullet holes she has for eyes". I believe this, because she has to hide her true feelings from the outside to prevent anyone knowing what she really feels, and therefor her eyes seem to just glaze over and hold no feelings. I think she does this so that she can concentrate on trying to earn a living to stay alive, in doing this though, all her feelings are trapped inside and she is unable to overcome them. In doing this, it appears that she has no feelings and is completely isolated from the rest of the community. This is illustrated in line 29-30 "round the shatter-proof crone who stands alone". ...read more.