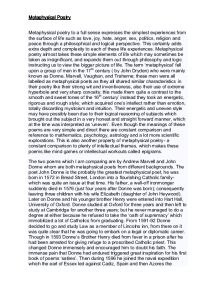 Metaphysical Poetry Metaphysical poetry to a full sense expresses the simplest experiences from the surface of life such as love, joy, hate, anger, s*x, politics, religion and peace through a philosophical and logical perspective. This certainly adds extra depth and complexity to each of these life experiences. Metaphysical poetry almost takes these simple elements of life which may sometimes be taken as insignificant, and expands them out through philosophy and logic instructing us to view the bigger picture of life. The term 'metaphysical' fell upon a group of men in the 17th century ( by John Dryden) who were mainly known as Donne, Marvell, Vaughan, and Traherne; these men were all labelled as metaphysical poets as they all shared similar characteristics in their poetry like their strong wit and inventiveness, also their use of extreme hyperbole and very sharp conceits; this made them quite a contrast to the smooth and sweet tones of the 16th century' instead they took an energetic, rigorous and rough style; which acquired one's intellect rather than emotion, totally discarding mysticism and intuition. Their energetic and uneven style may have possibly been due to their logical reasoning of subjects which brought out the subject in a very honest and straight forward manner, which at the time was interpreted as 'uneven'. Even though the meanings of these poems are very simple and direct there are constant comparison and reference to mathematics, psychology, astrology and a lot more scientific explorations. This is also another property of metaphysical poetry- a constant comparison to plenty of intellectual themes, which makes these poems like mind games or intellectual workouts called epigrams. The two poems which I am comparing are by Andrew Marvell and John Donne whom are both metaphysical poets from different backgrounds. The poet John Donne is the probably the greatest metaphysical poet, he was born in 1572 in Bread Street, London into a flourishing Catholic family- which was quite an issue at that time. ...read more.

Indeed, despite its romantic qualities, invoking the bed the lovers share as the center of the sun's orbits has a clear sensual tinge; it is as if the s****l activity of the lovers is the center of the world, for what else is a bed the symbol of, if not s*x? Andrew Marvell was born after John Donne in March the 31st 1621 exactly ten years after Donne died. Marvell was born in Winestead in Holderness, Yorkshire. But Marvell was educated at Cambridge where he received an inheritance upon his father's death that gave him four years to travel the continent. Marvell wasn't a puritan himself but he supported them during the civil war and he held a number of posts for example becoming the assistant of John Milton whom was blind and who was Cromwell's Latin secretary. Then in 1659, Marvell was elected to parliament where he served until his death. In parliament he expressed strong disagreements against the government in a series of outspoken and anonymously printed satires. And it was because of these political satires rather than his love poems that Andrew Marvell has become so famous. Marvell died on the 16th of August 1678 of tertian ague and the unprofessional conduct of the attending surgeon. The Poem in which I am analyzing is by Andrew Marvell, it's called 'To His Coy Mistress' which was written between 1650 and 1653, when Marvell was around 29 to 32 years of age. Andrew Marvell writes a sophisticated poem that is not only targeted to his 'coy mistress' but to the audience as well. The main concern of this poem is that time is unavoidably passing and Marvell wishes for his mistress to act upon his desire and have a s****l relationship with him. Marvell constantly proposes to the reader and his mistress that they must act upon their desires, and not to hesitate anymore but to seize the moment, make the most of their youth before time expires, overall it is this concern that provokes the persuading tone of this poem which is clearly evident. ...read more.

This shows that when two people are facing true love; time often flows by quickly, sometimes with no meaning. There were also very obviously different tones in each poem, because of their different concerns. Donne's tone was quite pestered, aggressive and scornful, as the opening line portrait; 'busy old fool, unruly sun' or sometimes he used rhetorical questions to assert his power; 'thy beams so reverend and strong, why shouldst thou think?' Donne's tone didn't change tremendously through out the poem, but he did sometimes descend into an arrogant and boastful tone; 'she's all states and princes I'. Marvell's tone was in general quite persuasive. Initially as well as having a persuasive tone he also had a fun and playful tone, this was evident through his use of alliteration in the opening lines. But from the second stanza onward he still possessed a persuasive tone, but he eliminated his playful tone and replaced it with a more serious, and dark tone; as he kept reminding the mistress of death: 'But at my back I can always hear times winged chariot hurrying near'. There is also a constant reference to the Sun in each poem. Donne refers to the Sun because it is the cause of concern of his poem, because the sun 'through windows and through curtains calls on' him and mistress whilst they are trying to relax. Whereas Marvell relates to Sun as a tool of time, that provides him and his mistress with time; 'thus thou we cannot make our Sun', meaning we cannot make more time. But there is one thing in which both the poets are fully related on: The praise of their mistresses. The romantic Donne compared his mistress to being equivalent of the wealth of 'both th'Indies'. Where as the saucy Marvell visualised his naked mistress head to toe and promised 'an age at least' to praise every part of her body! ...read more.