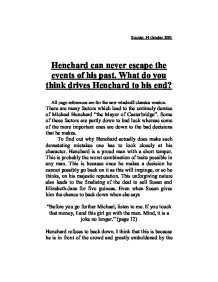 The untimely demise of Michael Henchard

Sunday, 14 October 2001 Henchard can never escape the events of his past. What do you think drives Henchard to his end? All page references are for the new windmill classics version. There are many factors which lead to the untimely demise of Michael Henchard "the Mayor of Casterbridge". Some of these factors are partly down to bad luck whereas some of the more important ones are down to the bad decisions that he makes. To find out why Henchard actually does make such devastating mistakes one has to look closely at his character. Henchard is a proud man with a short temper. This is probably the worst combination of traits possible in any man. This is because once he makes a decision he cannot possibly go back on it as this will impinge, or so he thinks, on his majestic reputation. This unforgiving nature also leads to the finalising of the deal to sell Susan and Elizabeth-Jane for five guineas. Even when Susan gives him the chance to back down when she says "Before you go further Michael, listen to me. If you touch that money, I and this girl go with the man. Mind, it is a joke no longer." ...read more.

I think that Henchard hires Farfrae for two main reasons. First and foremost he is hired because he knows a way to restore "growed wheat" back to almost its original state and secondly and more subtly he hires Farfrae so that he may make a friend. Henchard can never escape the events of his past mainly because the mistakes that he makes are long-term ones. For example when he sells his wife and child they don't instantly stop having anything to do with him and cease to exist, instead they just move out of sight and out of mind. This allows Henchard to continue his life as a corn factor with the two burdens of his conscience and his vow. Henchard's bad temper is also a major contributing factor in his downfall. When Henchard holds the revelries, Farfrae, unknown to Henchard at the time, organises another venue in case the original plans were rained off. In fact it did rain and whilst Henchard's revelries were cancelled, at massive loss of face for him, Farfrae's were a roaring success. Henchard, being the type of person that he was, took this as a personal insult and fired Farfrae on the spot. ...read more.

Henchard willingly agrees but, being to depressed to go to her himself, sends Jopp, whom he is staying with, to her with the package. On the way Jopp stops at an inn called Peter's Finger and opens the package. The customers learn of the affair and organise a skimmity-ride outside Farfrae and Lucetta's house when Donald is out of town. This has two disastrous effects. Firstly it leads to the untimely death of Lucetta and secondly Michael sees the effigy of himself floating face down, which was tossed into the river when the police arrived and broke up the skimmity-ride. This causes him to dwell on thoughts of death and suicide. It is this, I think, which finally makes Henchard want to drown himself. All of these reasons made Henchard incredibly depressed. So depressed in fact that he finally drowns himself. Looking back on his life Henchard was mainly unlucky with his decisions and whenever something could go wrong for him it usually did. I think that Henchard could not possibly escape from the events of his past because each one started a multitude of other events which all intertwined. None of this would have happened, or indeed been possible, if Henchard had not sold his wife on that fateful day at the Weydon Fair. James Kay 5r ...read more.