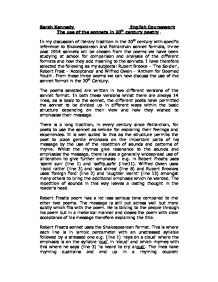 The use of the sonnets in 20th century poetry.

Sarah Kennedy English Coursework The use of the sonnets in 20th century poetry . In my discussion of literary tradition in the 20th century with specific reference to Shakespearean and Patrarchan sonnet formats, three post 1914 sonnets will be chosen from the poems we have been studying at school for comparison and analysis of the different formats and how they add meaning to the sonnets. I have therefore selected the following as my subjects: Rupert Brooke - 'The Soldier', Robert Frost - 'Acceptance' and Wilfred Owen - 'Anthem for Doomed Youth'. From these three poems we can now discuss the use of the sonnet format in the 20th Century. The poems selected are written in two different versions of the sonnet format. In both these versions whilst there are always 14 lines, as is basic to the sonnet, the different poets have permitted the sonnet to be divided up in different ways within the basic structure depending on their view and how they wished to emphasise their message. There is a long tradition, in every century since Patrarchan, for poets to use the sonnet as vehicle for exploring their feelings and experiences. ...read more.

This constitutes the last six lines of the Petrarchan format. Here is the sequence for the whole Petrarchan format: abbaabba, cdcdcd. Rupert Brookes poem is him talking to his country in a patriotic way after the war. He is telling people his love for the country and not just for one person, the tone is a very religious epitaph and brings the point of his poem out very strongly. Rupert Brookes sonnet 'The Soldier' was one of the great war poems and expressed a very patriotic and noble attitude to the war which wasn't as realistic in people's eyes compared to other authors at the time such as Wilfred Owen. This made Rupert Brookes sonnet very individualistic. The use of the chosen format brings emphasis to certain parts of the sonnet for example the quatrain: a - introduces the question b - gives reasons and answers b- gives different answers in a similar way. Using repetition with similar patterns so the pattern of verse suits the poets wish to re-emphasise his message here is an example: a- If I should die,.... b-That theres some... b-That is forever... All of this adds to the message that Rupert Brooke was trying to give out to the readers of his poem. ...read more.

Of the three, my personal favourite is 'The Soldier' by Rupert Brooke because of his different way 'take' on the aftermath of the war and the noble sentiments expressed, differentiating his work from other authors work after the war. The format of the poem does add extra emphasis to the message of the poem, the first quatrain of the octave is particularly memorable and uses two different kinds of figurative language being assonance and alliteration which add more thought into the first section of the poem. Such use of figurative language in all 3 poems paints a picture and helps the reader engage in the poem bringing more power and meaning to the reader. Together with Alliteration, there is also the use of Assonance - the sound of two vowels in the same sentence repeating the sound e.g. if 'I should die' (The soldier, line1), Irony - when one thing is said but altogether another one is meant, Connotations - when there are hidden meanings to words which help add imagery e.g. 'bugles calling' (Anthem for doomed youth, line 8) ' and Onomatopoeia - when a word is used to echo a sound e.g. 'wailing shells' (Anthem for Doomed Youth, line7). This all serves to involve the reader more by either leaving a lasting sound in their head or making them engage their brain in the poem. ...read more.