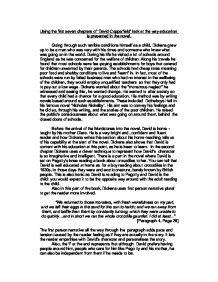 The Way Education is presented in the Novel David Copperfield

Using the first seven chapters of 'David Copperfield' look at the way education is presented in the novel. Going through such terrible conditions himself as a child, Dickens grew up to be a man who was very with his times and someone who knew what was going on in the world. During his life he visited a lot of schools around England as he was concerned for the welfare of children. Along his travels he found that most schools were fee-paying establishments for boys that catered for children unwanted by their parents. The schools had cheap rates meaning poor food and shabby conditions to live and "learn" in. In fact, most of the schools were run by failed business men who had no interest in the wellbeing of the children, they would employ unqualified teachers so that they only had to pay out a low wage. Dickens worried about the "monstrous neglect" he witnessed and seeing this, he wanted change. He wanted to alter society so that every child had a chance for a good education. His method was by writing novels based around such establishments. These included Dotheboys Hall in his famous novel 'Nicholas Nickelby'. His aim was to convey his feelings and he did so, through his writing, and the stories of the poor children. He raised the public's consciousness about what was going on around them, behind the closed doors of schools. Before the arrival of the Murdstones into the novel, David is home-taught by his mother Clara. ...read more.

He takes pleasure in someone's pain as he is a sadist. There is no need for this as David is an innocent boy who can be negotiated with, but Murdstone believes in firmness. Also in this chapter, Clara too, is exploited by Mr Murdstone. She practically loses all her power over her own life. Dickens had used: 'My house...Our house...Your house...' This is referring to the house, showing that all the control has been passed from Clara to Mr Murdstone and his sister, Miss Murdstone. For example, a highly symbolic event in the novel when the keys for the house are taken from her, along with all authority and freedom of choice over David and even herself. When Murdstone does so take over with his almighty power, he emotionally flattens David and his mother so much to the extent that their confidence and self-esteem is taken too, making them feel inferior, insecure and worthless in their own home. David and his mother through all this, still try to watch out for and protect one another, even though they have not half the control as Murdstone. They know that if they make one wrong move they will be punished, beaten and most definitely spoken down to, by either of the Murdstones. When David's mother is tutoring him, he stumbles on a few words. His mother knows that she should not help him but she attempts anyway by mouthing words to him. ...read more.

He begins to pick up on the characters around him and as he looks on, he judges people. Traddles is mentioned as 'the most unfortunate boy in the world' as he is beaten by Creakle everyday. He is also described as 'the merriest and most miserable of all the boys' This oxymoron tells the reader that he may have looked like a merry boy with his rosy, chubby cheeks but on the inside he was in pain and dreading everyday that was to come, like all the other boys in the school. The children were practically imprisoned in Salem House, even their post is censored so that the boys cannot tell their parents how awful the treatment that they were receiving was. When Dickens wrote 'David Copperfield', his aim was simple: to let people know what was going on behind the closed doors of such schools like Salem House around the UK, but the impact that his writing could have on social issues at the time was huge. When the public began to become aware of the appalling conditions that children were being brought up in, only then did action on such schools take place. Dickens felt that such schools were simply cruelty towards the children as they did not involve the children receiving any civilized form of education and should not be tolerated; he wanted rid of the abuse, suffering and exploitation of the weak, in this case the children. I think Dickens definitely achieved him aim effectively in this brilliant novel. ...read more.