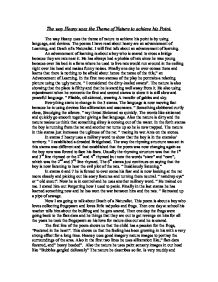 The way Heany uses the Theme of Nature to achieve his Point.

The way Heany uses the Theme of Nature to achieve his Point. The way Heany uses the theme of nature to achieve his point is by using language, and devices. The poems I have read about heany are an advancement of Learning, and Death of a Naturalist. I will first talk about an advancement of learning. An advancement of learning is about a boy who is scared to cross a bridge because they are rats near it. He has always had a phobia of rats since he was young because over his bed in a farm where he used to live rats would run around in the ceiling right over his head and makes funny noises. Finally one day he over comes them and learns that there is nothing to be afraid about hence the name of the title," an Advancement of Learning. In the first two stanzas of the play he portraits a relaxing picture using the ugly nature. " I considered the dirty-keeled swans". The nature is also showing that the place is filthy and that he is standing well away from it. He also using enjambment when he connects the first and second stanza to show it is still slow and peaceful language. " Pliable, oil-skinned, wearing A transfer of gables and sky. Everything starts to change in the 3 stanza. ...read more.

Then one day the frogs were going back to the flax-d*m and he things that they are out to get revenge on him for all the years he took the frogspawn so his love for nature dies out and he is scared. The first line of the poem shows us that the child has a passion for the frogs, "Festered in the heart". This shows us that the feeling has been growing in his with a very strong effect for a long time. Heaney uses good imagery nature images to portray the surroundings of the area. Also in the first two lines he uses alliteration like," flax-d*m festered, and" heavy headed". Also the nature he uses paint sensory images in our head like "Bubbles gargled delicately" The nature he describes so far. Is very muddy and slimy. The message he is trying to give across here is that it is a horrible scary place yet the boy is fearless and enjoys the nature. Another line which shows the fearlessness of the child is," warm thick slobber Of frogspawn that grew like clotted water. This simile does not just give us a sensory image but it shows that he likes the frogspawn even though other people find it disgusting. Now the whole poem starts to change because before he was using alliteration to make the sentences go quick and smooth but now the sentences are long and drag on. ...read more.

In both the poems heany uses fast language to show fear or memorable emotions the boy feels. Like in an "advancement of Learning" when the boy is forced to challenge his fear all the words start to flow together because he uses devices like alliteration or assonance, and he uses short quick sentences. When heany slows down his language everything seems to be calm and is usually in the begging. Also in both the poems heany loves to use war images or sensory images to help us understand what he is trying to say. I think that heany is talking about him self in the poems and I think that he used to love nature but something corrupted him, especially in " death of a naturalist because the boy he talks about looses his innocence in the poem and his love for nature. In conclusion the way heany uses the theme of nature to achieve his point is by using sensory images to make pictures in our minds and making us think. Like in "An Advancement of Learning he shows us the fear the young boy had and he describes the nature to make us think of slimy mud and mush and try to feel what the boy feels. " something slobbered curtly, close, Smudging the silence." Also in "Death of a Naturalist" Poised like mud grenades, their blunt heads farting. I sickened, turned and, ran." ...read more.