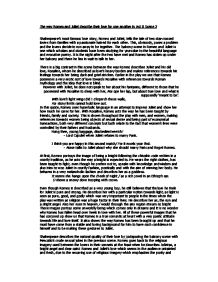 The way Romeo and Juliet describe their love for one another in Act II Scene 2 Shakespeare's most famous love story, Romeo and Juliet, tells the tale of two star-crossed lovers from families with a passionate hatred for each other. This, obviously, poses a problem and the lovers decide to run-away to be together. The balcony scene in Romeo and Juliet is one which scholars and students have been studying for years due to the beautiful language and evocative poetry. It is the night after the two have met and Romeo has stolen up under her balcony and there he lies in wait to talk to her. There is a big contrast in this scene between the way Romeo describes Juliet and his old love, Rosaline, whom he described as love's heavy burden and makes references towards his feelings towards her being dark and grief-stricken. Earlier in the play we see that Romeo possesses a very erotic sort of love towards Rosaline with references towards Roman mythology and the idea that love is blind. However with Juliet, he does not speak to her about his fantasies, different to those that he possessed with Rosaline to sleep with her, Nor ope her lap, but about true love and what is supposedly 'meant to be'. ...read more.

At first, when Juliet thinks she is alone on the balcony she utters one of the most remembered quotes from the whole play, O Romeo, Romeo, wherefore art thou Romeo? In which she is asking him why he has been christened with the name Romeo, a Montague, and why he is the son of her father's most sworn enemies. She asks him to deny his name and his family for her sake, Deny thy father, and refuse thy name. Juliet then asks herself what is in a name and what it represents, or whether it is just a name. She says that his name is the only trouble and not Romeo himself: the word, not the person, by using a beautiful metaphor, What's in a name? That which we call a rose By any other word would smell as sweet. This shows her young artistic talent and how fresh she is to the world with nothing but love and excitement on her mind. Juliet speaks aloud about how she refuses to believe that Romeo is defined as a Montague and that they can still love each other without the social repercussions, here Juliet portrays her maturity level also as she is able to think level-headedly and is able to conclude eloquently an answer, that of which many girls her age cannot. ...read more.

The feelings she has now surpasses all her other ones of logic and reason and conveys to the audience a rush of overwhelming passion and longing to be with Romeo. Give me my Romeo, and when I shall die, Take him and cut him out in little stars. A beautiful metaphor to describe the pain Juliet imagines that she will feel when Romeo dies. It is sad because it is full of tragic irony as the audience all know the ending of the tale of the two star-crossed lovers. The extract is deep and really penetrates the heart of Juliet as she opens up to the audience. Although Romeo matures during play, he remains somewhat immature when compared with Juliet, a pattern that occurs throughout their relationship. Although Juliet is only 13, she considers the world with striking maturity. As later acts reveal, her parents do not provide an emotionally rich and stable environment, possibly forcing Juliet to mature beyond her years. On the outside, this heartfelt scene is very moving and emotional but as you begin to read in between the lines you pick up on a sinister undertone of tragic irony and destiny. This, combined with the lovers' words, creates a very intense play and Shakespeare seems to us far ahead of his times. ?? ?? ?? ?? ...read more.