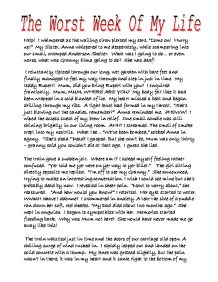 The worst week of my life

Help! I whimpered as the wailing siren pierced my ears. "Come on! Hurry up!" My Sister, Anna whispered to me desperately, while scampering into our small, cramped Anderson Shelter. What was I going to do... or even worse, what was Granny Elma going to do? She was deaf! I reluctantly tiptoed through our long, wet garden with bare feet and finally managed to feel my way through and step in just in time. My teddy Rupert! Mum, did you bring Rupert with you? I enquired frantically. Mum, MUM, WHERE ARE YOU? My body felt like it had been wrapped in a cold blanket of ice. My heart missed a beat and began drilling through my ribs. A tight knot had formed in my throat. "She's just blowing out the candles, remember?" Anna reminded me. PHEWW! I wiped the access sweat of my brow in relief. One small candle was still shining brightly in our living room. AHH! I screamed. The smell of smoke crept into my nostrils. What the... "We've been bombed," sobbed Anna in agony. "She's dead." Dead? I gasped. But she can't be, Mum was only thirty - granny said you couldn't die at that age. I guess she lied. The train gave a sudden jolt. Where am I? I asked myself feeling rather confused. "Yer told me yer were on yer way to yer billet." The girl sitting directly opposite me replied. "I'm off to see my Granny." She announced, trying to make an interesting conversation. I wish I could see mine but she's probably dead by now. I revealed in sheer pain. "Nowt to worry about," she reassured. "And how would you know?" I retorted. Her eyes started to water. Wwhatt hhave I ddonne? I stammered in anxiety. A tear the size of a puddle ran down her soft, red cheeks. "My Dad died about two months ago." She wept in anguish. ...read more.

All that could be done at the moment was to wait, and pray that he hasn't moved it to some other impossible place, which no one would ever dream of finding. What was that? A loud shuffling noise alerted my ears. Out of the blue, Mr Ford came out from inside the room. His stomach seemed too grown since I last saw him...the bag! So that's were it was! But it was not over yet. He gave me a speedy wave and then crept back into yet another room locking the door behind him. The same mysterious shuffling sound was heard once more but much louder. Within a few seconds, Mr Ford was on the right side of the door and staring into my confused eyes. He then skipped lightly down the stairs; the floor board didn't even make one squeak, quite a difference from last time. Looking behind my shoulder on the way, I tiptoed to the room in which my guardian had last entered. The bag, there it was, slumped behind the bed! I ran towards it, this time, determined to find what it contained...Oh my god! Stashes of money, explosive bombs, why would he do that? I didn't know what was going on any more. A gold medal, killing people, soldiers, money, bombs, and mysterious phone calls, everything was just a big secret which I knew would be found out sooner or later. BANG! What was that? I galloped to the window and found myself staring at a huge khaki coloured GERMAN WARPLANE, having just crashed on the other side of the road. That was so close, I couldn't believe my luck! Even though, my gas mask was in the next bedroom. I ran downstairs and switched on the radio, waiting to listen to the news. "Good afternoon, this is Elizabeth Cheese reporting." "Headlines today, are that a German soldier, along with a few other colleges, has just kidnapped the usual person who rings the warning siren and taken the actual siren itself. ...read more.

"Your appetite's grown!" said my sister. She always did say I needed to eat more. Soon, everyone had finished eating and I was lead into the sitting room. It was ice cold so Mrs Trout lighted a blazing log fire so eventually we were all warm. I glanced at the clock which read quarter past nine. If Mr Ford was still living with me, it would be bedtime ages ago. "Let's switch on the radio, and listen to the headlines, maybe it'll be something important." suggested Mrs Trout. She brought the radio in to the room and plugged into the socket which was in the wall. We were just in time. Good evening, this is Elizabeth cheese reporting. Headlines today are that Mr Fritz, a German spy, going by the name of Mr Ford, was found to be living at Twenty Four Sesame Street along with other six colleagues. Fortunately the police were informed by Daniel Davies, a member of an Ambulance crew which came to collect a girl which Mr Ford had harmed, in order to stop his secret going public. As Daniel was asking the spy questions, he managed to spot, and very cleverly recognise the German Medal which was pinned onto his chest. Daniel quickly phoned the police from Wiltshire Children's Hospital and they caught the culprits in the act. The court judge has sentenced them to life imprisonment. That's all for tonight, thank you for listening to the London News. Goodbye. We all cheered and gave each other a huge hug. Now you're safe! cried Mrs Trout. "Do you know that you can stay with us for ever?" She continued. I would love too! I replied contently. "This deserves a celebration!" exclaimed Anna. She rushed into the kitchen and was back in a few minutes. "Anyone for a slice of toast?" She started. You bet! I replied, and with that, I picked up a slice, remembering everyone in the City who was constantly being bombed; all the people children who were less fortunate than me and how that was the worst and the best week of my life. ...read more.