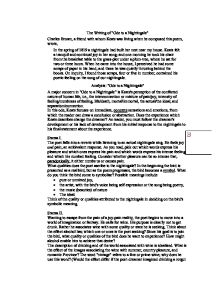 The Writing of "Ode to a Nightingale" Charles Brown, a friend with whom Keats was living when he composed this poem, wrote, In the spring of 1819 a nightingale had built her nest near my house. Keats felt a tranquil and continual joy in her song; and one morning he took his chair from the breakfast table to the grass-plot under a plum-tree, where he sat for two or three hours. When he came into the house, I perceived he had some scraps of paper in his hand, and these he was quietly thrusting behind the books. On inquiry, I found those scraps, four or five in number, contained his poetic feeling on the song of our nightingale. Analysis: "Ode to a Nightingale" A major concern in "Ode to a Nightingale" is Keats's perception of the conflicted nature of human life, i.e., the interconnection or mixture of pain/joy, intensity of feeling/numbness of feeling, life/death, mortal/immortal, the actual/the ideal, and separation/connection. In this ode, Keats focuses on immediate, concrete sensations and emotions, from which the reader can draw a conclusion or abstraction. Does the experience which Keats describes change the dreamer? As reader, you must follow the dreamer's development or his lack of development from his initial response to the nightingale to his final statement about the experience. Stanza I. The poet falls into a reverie while listening to an actual nightingale sing. ...read more.

What is the effect of the words "fade" and "dissolve"? Why "far away"? What is the relationship of the bird to the world the poet describes? See line 2. Characterise the real world, which the poet describes. By implication, what kind of world does the nightingale live in? (Is it the same as or different from the poet's?) Lead is a heavy metal; why is despair "leaden-eyed" (line 8)? Stanza IV. The poet suddenly cries out "Away! away! for I will fly to thee." He turns to fantasy again; he rejects wine in line 2, and in line 3 he announces he is going to use "the viewless wings of Poesy" to join a fantasy bird. In choosing Poesy, is he calling on analytical or scientific reasoning, on poetry and imagination, on passion, on sensuality, or on some something else? He contrasts this mode of experience (poetry) to the "dull brain" that "perplexes and retards" (line 4); what way of approaching life does this line reject? What kinds of activities is the brain often associated with, in contrast to the heart, which is associated with emotion? In line 5, he succeeds or seems to succeed in joining the bird. The imagined world described in the rest of the stanza is dark; what qualities are associated with this darkness, e.g., is it frightening, safe, attractive, empty, fulfilling, sensuous, alive? ...read more.

Or is the bird the visionary or imaginative realm, which inspires poets? Or does the bird's song symbolise poetry and has the passion of the song/poem carried the listening poet away? * Has the actual bird been transformed into a myth? * Does this one bird represent the species, which by continuing generation after generation does achieve a kind of immortality as a species? * Is the nightingale not born for death in the sense that, unlike us human beings, it doesn't know it's going to die? An implication of this reading is that the bird is integrated into nature or is part of natural processes whereas we are separated from nature. The resulting ability to observe nature gives us the ability to appreciate the beauty of nature, however transitory it--and we--may be. The poet contrasts the bird's singing and immunity from death and suffering with human beings, "hungry generations." What is he saying about the human experience with "hungry"? If you think in terms of the passage of time, what is the effect of "generations"? The stanza begins in the poet's present (note the present tense verbs tread and hear in lines 2 and 3). Keats then makes three references to the bird's singing in the past; the first reference to emperor and clown is general and presumably in a historical past; the other two are specific, one from the Old Testament, the other from fairy tales. The past becomes more remote, ending with a non-human past and place ("faery lands"), in which no human being is present. ...read more.