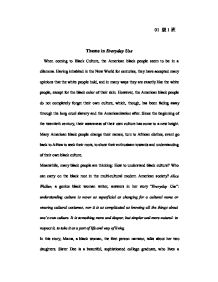 Theme in Everyday Use.

01 ?1? Theme in Everyday Use When coming to Black Culture, the American black people seem to be in a dilemma. Having inhabited in the New World for centuries, they have accepted many opinions that the white people hold, and in many ways they are exactly like the white people, except for the black color of their skin. However, the American black people do not completely forget their own culture, which, though, has been fading away through the long cruel slavery and the Americanization after. Since the beginning of the twentieth century, their awareness of their own culture has come to a new height. Many American black people change their names, turn to African clothes, event go back to Africa to seek their roots, to show their enthusiasm towards and understanding of their own black culture. Meanwhile, many black people are thinking: How to understand black culture? Who can carry on the black root in the multi-cultural modern American society? Alice Walker, a genius black woman writer, answers in her story "Everyday Use": understanding culture is never as superficial as changing for a cultural name or wearing cultural costumes; nor it is as complicated as knowing all the things about one's own culture. It is something more and deeper, but simpler and more natural: to respect it, to take it as a part of life and way of living. ...read more.

"She probably be backwards enough to put them to everyday use." "I reckon she would," I said, "God knows I been saving'em for long enough with nobody using'em. I hope she will." "But they're priceless!" she was saying now, furiously; for she had a temper. "Maggie would put them on bed and in five years they'd be in rags. Less than that!" "She can always make same more," I said. "Maggie knows how to quilt." Dee looked at me with hatred. "You just will not understand. The point is these quilts, these quilts!" "Well," I said, stumped. "What would you do with them?" "Hang them," she said. As if that was the only thing you could do with quilts. Maggie by now was standing in the door. I could almost hear the sound her feet as they scraped over each other. 'She can have them, Mama', she said, like someone used to never winning anything, or having anything reserved for her. "I can 'member Grandma Dee without the quilts." Wangero(Dee) wants to take those quilts, because she thinks her mother and sister do not understand the priceless heritage. "Maggie would put them on the bed and in five years they'd be in rags" and she will 'hang them' to preserve and appreciate the priceless heritages. Who on earth really understands and appreciates the heritage and culture? ...read more.

Hakim-a-barber said" I accept some of their doctrines, but farming and raising cattle is not my style." We sat down to eat and right away he said he didn't eat collards and pork was unclean. This man, from his appearance, looks very much like a traditional African man: the long hair, the long and complicated name, the words he uses to greet people and the way he greets people. But however much he makes himself look like an African and however much knowledge he shows about his culture, his failing to respect it expose he does not understand black culture at all. "I accept part of their doctrines, but farming and raising cattle is not my style." His words obviously exude contempt to farming and raising animals, which, in fact, are the exact essential part of his culture to which he is trying to show his superior understanding, awareness and concern. Without doubt, he is just showing off his knowledge which means nothing when being separated from traditions, ideologies, all the real components of culture from which knowledge derives. People like him and Wangero(Dee) just want to impress others with their awareness and knowledge of their culture. Never can these people be the black root carrier. Through the dialogues and description of characters, Everyday Use presents readers, not only the black people, an alarming theme about culture, leaving readers rethinking how to understand culture and redeciding their role in preserving and carrying on culture in the multi-cultural modern world. ...read more.