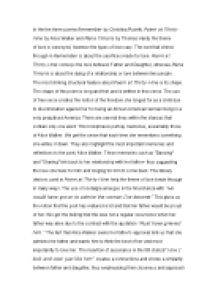 Theme of love in 3 poems - Remember by Christina Rosetti, Poem at Thirty- Nine by Alice Walker and Plena Timoris by Thomas Hardy

﻿In the the three poems Remember by Christina Rosetti, Poem at Thirty-Nine by Alice Walker and Plena Timoris by Thomas Hardy the theme of love is conveyed, however the types of love vary. The love that shines through in Remember is about the sacrifices made for love. Poem at Thirty-Nine conveys the love between Father and Daughter, whereas Plena Timoris is about the dying of a relationship or love between two people. The most striking structural feature about Poem at Thirty-Nine is its shape. The shape of the poem is long and thin and is written in free verse. The use of free verse creates the notion of the freedom she longed for as a child due to discrimination against her for being an African American woman living in a very prejudiced America. There are several lines within the stanzas that contain only one word. This holophrasis portray memories, assumably those of Alice Walker. We get the sense that each time she remembers something she writes it down. They also highlight the most important memories and reflections to the poet; Alice Walker. These memories such as ?Dancing? and ?Sharing? link back to her relationship with her father? thus suggesting the love she feels for him and longing for him to come back. ...read more.

?Remember? Not only is this the title of the poem but it is also used in repetition. By having this as the title as well as using it in repetition it certifies that the audience will remember the main focus and point in this poem. Another example of repetition is ?Gone away Gone far away? This emphasizes the fact that she is no longer around; that she is absent. This would provide a stark difference to when she was alive- their relationship has gone from intimate to the opposite. The reason for this change in intimacy is due to her ever present love for God and her realisation that the only person she wants to be with is him. ?Nor I half turn to go yet turning to stay? This is the segment in which juxtaposition is found in the poem. It emphasizes the fact that she is never going to come back and that her love for God will always be there no matter how hard she tries to forget it or put it to the back of her mind. ?Silent land? The silent land in which Christina Rossetti is referring to is death. ...read more.

The realisation is that this has happened before and may happen again; when the girl realises this she immediately backs away to avoid heartbreak. When the climax strikes that is when Thomas Hardy introduces direct speech; ?There?s a woman in the canal below.? The dialogue both gives the notion of a reality check, and gives a more defined line between happiness and sorrow. It also changes the pace of the poem as the speech is more direct so we get a more clear idea of what has happened. The fact that it is not all based in a third person view gives a broader perspective on this scenario. The three poems all convey the theme of love in a different way. The poets of Plena Timoris, Poem at Thirty-Nine and Remember all use various techniques and devices to do so. The techniques common within the poems are repetition, (in Poem at Thirty-Nine and Remember), Euphemism (in Poem at Thirty-Nine and Remember) and empathetic language in all three. In my opinion the poem I feel to be the most successful in portraying the theme of love is Plena Timoris. This is because it shows two very different types of love. These two types contrast with each other and inform the reader that love is not just filled with happiness. ...read more.