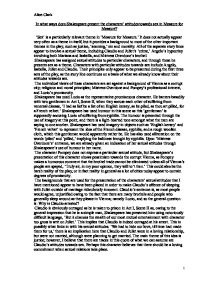 Theme's in 'Measure for Measure.'

's*x' is a particularly relevant theme in 'Measure for Measure.' It does not actually appear very often as a theme in itself, but it provides a background to most of the other important themes in the play, such as justice, 'seeming,' sin and morality. All of the separate story lines appear to involve a s****l theme, including Claudio and Juliet's 'crime,' Angelo's hypocrisy involving both Mariana and Isabella, and Mistress Overdone's brothel. Shakespeare has assigned s****l attitudes to particular characters, and through these he presents s*x as a theme. Characters with particular attitudes towards s*x include Angelo, Isabella, Juliet and Claudio. Their principles only appear to be presented during the first three acts of the play, as the story line continues on a basis of what we already know about their attitudes towards s*x. The individual views of these characters are set against a background of Vienna as a corrupt city; religious and moral principles; Mistress Overdone and Pompey's professional interest, and Lucio's promiscuity. Shakespeare has used Lucio as the representative promiscuous character. He banters bawdily with two gentlemen in Act I, Scene II, when they accuse each other of suffering from venereal disease, 'I had as lief be a list of an English kersey, as be piled, as thou art pilled, for a French velvet.' Shakespeare has used humour in this scene as this 'gentleman' is supposedly accusing Lucio of suffering from syphilis. The humour is presented through the use of imagery at this point, and there is a light-hearted tone amongst what the men are saying to one another. Shakespeare has used imagery in objects such as 'English kersey' and 'French velvet' to represent the idea of the French disease, syphilis, and a rough woollen cloth, which this gentleman would apparently rather be. He has also used alliteration on the words 'piled' and 'pilled,' implying the baldness brought by syphilis. Upon 'Mistress Overdone's' entrance, we are already given an indication of her s****l attitudes through Shakespeare's use of humour in her name. ...read more.

There is repeated use of s****l imagery in Angelo's monologue at the end of the scene, for example, 'O, cunning enemy, that, to catch a saint, with saints dost bait my thy hook!' There is a definite irrational tone created in this speech, as in contrast to Angelo's earlier short and cold responses, his speech here has been presented as unorganised and erratic by Shakespeare, which implies to the audience/reader that Angelo is overwhelmed with desire. In Act II, Scene IV, Angelo proposes that Isabella sleep with him in order to save her brother's life, 'You must lay down the treasures of your body to this supposed, or else let him suffer.' Shakespeare has created an intense, valuable idea about Isabella, and Angelo's feelings, through Angelo's use of the word 'treasures.' This proposition implies that Angelo's strict principles are actually only upheld for his reputation, for he is being highly hypocritical (though only to Isabella), and is prepared to break the law to suit himself. He also points out that such hypocrisy will not affect his reputation, as nobody will believe Isabella's claims over his, 'As for you, say what you can: my false o'erweighs your true.' Ironically, Angelo is saying that reputation is so clean that it cannot be corrupted. This claim presents an evil tone within Angelo as he is clearly abusing his power at this point. To conclude Angelo's attitudes towards s*x, Shakespeare has presented them through his determination to uphold the abandoned law of s*x only being inside of marriage, and the hypocrisy hidden from the public of Vienna proves that it is actually only for his reputation. The character Isabella has very modest and morally defined views of s*x. We are introduced to her principles in her first appearance in the play, as she discusses with 'Nunnery' her forthcoming career as a nun. At first she seems to dislike the low amount of privileges a Nun has, 'And you nuns have no farther privileges?' ...read more.

Isabella is the purity of the play, and although she shares Angelo's stubbornness, her s****l attitudes and moral principles make her the protagonist of the play. Claudio and Juliet's attitudes are in agreement for the majority, as their acts and even s****l attitudes unleash the main story lines of the play, and Juliet's mutual values create contrast with Angelo's s****t ones. The Duke's minor attitudes more or less sit alongside Angelo's, although the contrast is created as the Duke is genuinely concerned for Vienna, whilst Angelo is only concerned for his reputation. I personally feel that Shakespeare's presentation of the characters' s****l attitudes is very well contrasted and brought together. I also think that his use of imagery and tone creates a clear presentation of the characters. 'The voices of Pompey and Lucio represent a humorous and humane view which runs like a thread through 'Measure for Measure'' (Dennis Walder). As I mentioned, Pompey does in fact speak out what Shakespeare probably intends to be the reality of the play. I agree to a degree that Lucio, too, represents the humane view of the play, although I think that he is the humour of it, and Pompey represents the humane view. Walder's comment relates to both Lucio and Pompey's attitudes towards s*x because, although many characters uphold principles based on aspects such as religion and justice, their view is based on the reality of the corrupt city. Their attitudes towards s*x are probably the most important of all the characters in the play because their characters were, I believe, created to present the theme of s*x, whereas with the other characters, their s****l attitudes were simply assigned to them after Shakespeare created them. I do believe that these characters provide the basis for the theme of s*x, and the other characters' s****l attitudes. It is of course, I think, through these attitudes and principles that the theme of s*x is presented. Alice Clark In what ways does Shakespeare present the characters' attitudes towards s*x in Measure for Measure? 1 ...read more.