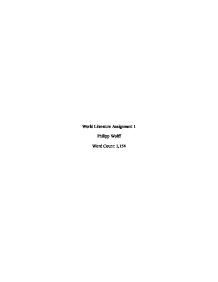 Themes in both Federico L'Orca's The House Of Bernarda Alba and Henrik Ibsen's A Doll's House.

World Literature Assignment 1 Philipp Wolff Word Count: 1,154 The role, treatment, disadvantages, and sacrifices of women in their societies are vital themes in both Federico L'Orca's The House Of Bernarda Alba and Henrik Ibsen's A Doll's House. In Federico L'Orca's The House Of Bernarda Alba, to start with, all characters that appear on stage are females, and men are merely talked about. In Ibsen's A Doll's House the protagonist is Nora, a woman who gets treated by her husband as though she were a little girl. At the time when Federico L'Orca and Henrik Ibsen wrote their plays, it was normal for women to get treated as anything but equal to men. Women were expected by men and by their society to do nothing more than stay at home, cook for their family, get children, and then take care of their children as well. Although Ibsen and L'Orca wrote these plays several decades apart, since Ibsen wrote his play at the turn of the century in Norway and L'Orca wrote his in 1930's Spain, the expectations of women were pretty much the same. ...read more.

She is expected by her husband Torvald to just stay at home, take care of the children, and do the housework. He talks to Nora like a little girl, and calls her names such as "squirrelkin", "silly girl", and "my little songbird", which are all very degrading shows how dumb and na�ve Torvald thinks she is. In return, Nora plays along and acts the way Torvald always expects her to act. Until the end of the play where she leaves him, she acts the way that Torvald wants her to act, and Torvald doesn't for one second doubt that she is dumb and hopeless with anything but housework. When she leaves him, Nora says to Torvald "I have been performing tricks for you, Torvald. That's how I've survived. You wanted it like that. You and Papa have done me a great wrong. It's because of you I've made nothing of my life." Although Torvald never finds out about it himself, Nora had saved his life by taking up a loan from a bank, and secretly works to repay the loan. This shows how much Nora has to secretly do and sacrifice for their marriage. ...read more.

Linde. Mrs. Linde is deeply in love and happily married to Krogstad, a lawyer with very little money. Mrs. Linde is forced to leave Krogstad, simply because he does not have enough money, and she has to live by herself and work, until she can find a wealthier man who can support her as well. The fact that although Krogstad and Mrs. Linde fit together perfectly, yet she has to leave him because he does not earn enough money illustrates how men were responsible for the financial support of the family, and it was up to women had to find a man who could support them and possibly their children. In conclusion, all women in both A Doll's House and The House Of Bernarda Alba have to suffer and make sacrifices merely because of the fact that they are women. The fact that the sacrifices these characters have to make and the disadvantages they have may point to the fact that Henrik Ibsen and Federico L'Orca are both to an extent critics of their societies, and believed that there should be a certain equality between men and women. ?? ?? ?? ?? ...read more.