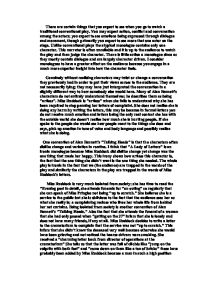 There are certain things that you expect to see when you go to watch a traditional conventional play.

There are certain things that you expect to see when you go to watch a traditional conventional play. You may expect action, conflict and conversation among the actors; you expect to see emotions being expressed through dialogue and movement, though primarily you expect to see more that one actor on the stage. Unlike conventional plays the atypical monologue contains only one character. This narrator is often unreliable and it is up to the audience to watch the play and then judge the character. There is little action a monologue since as they mostly contain dialogue and are largely character driven. I consider monologues to have a greater affect on the audience because you engage in a much more superior insight into how the character feels. Genuinely without realising characters may twist or change a conversation they previously had in order to put their views across to the audience. They are not necessarily lying; they may have just interpreted the conversation in a slightly different way to how somebody else would have. Many of Alan Bennett's characters do not entirely understand themselves; he describes them as being "artless". Miss Ruddock is "artless" when she fails to understand why she has been required to stop penning her letters of complaint. ...read more.

She received a "charming letter back from director of operations at the crematorium" She tells us that the letter was full of clich�s like "jump on the culprits with both feet" and "come down on them like a ton of bricks" these have probably been added by Miss Ruddock because a man in such a high position who worked at a crematorium would not use such inappropriate phrases. It is the job of the audience in a monologue to judge the character and decide on what they think was and was not said; the real letter was probably more sophisticated and much plainer. Miss Ruddock does not realise that she is adding things into the letter that were not really in there when she is telling us about it, this is an example of how "artless" she is. She then sends a copy of the letter she received from the director of operations at the crematorium to the grieving family of the woman she had only met a few times on the bus. Another convention of "Talking Heads" is that the tone is often a mixture of tragedy and humour, moments of hopelessness together with by moments of humour. Miss Ruddock explains how she did not expect a reply from the family because whenever anyone died there is a "mass of correspondence." ...read more.

Also phrases like "temporary temple for the racial minorities" and "this other side's Asians so they wont know what's normal and what isn't" show that Miss Ruddock is very r****t which infers she is living in the past where people were not as politically correct. Like her letter writing, she doesn't realise that r****m is wrong. I think Bennett intended to show that although today's society is politically correct, some older generation people are living in the past and cannot change their views easily because they were often brought up with r****m around them. This character definitely follows the conventions of Alan Bennett's "Talking Heads", and all of the conventions relate to each other and all cause her unhappiness. Firstly Miss Ruddock dislikes change and prefers the security of routine, this leaves her in the past using words like "kiddy" while society changes, she is left an outsider trapped inside her small world, too "artless" to realise that change is the one thing she really needs to make her happy. The whole play is quite tragic. The title suggests that, aswell as having a high status, Miss Ruddock writes many letters, yet she finds herself having to talk through her life instead of writing about it, though she cannot separate herself from epistolary even when speaking to us which can be amusing. ...read more.