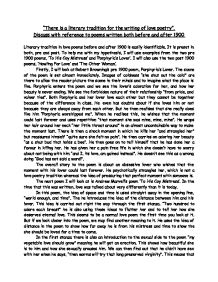 &quot;There is a literary tradition for the writing of love poetry&quot;. Discuss with reference to poems written both before and after 1900.

"There is a literary tradition for the writing of love poetry". Discuss with reference to poems written both before and after 1900 Literary tradition in love poems before and after 1900 is easily identifiable. It is preset in both, pre and post. To help me with my hypothesis, I will use examples from the two pre 1900 poems, 'To His Coy Mistress' and 'Porphyria's Lover'. I will also use the two post 1900 poems, 'Howling For Love' and 'The Other Woman'. Firstly, I will look at Robert Browning's pre 1900 poem, Porphyria's Lover. The scene of the poem is set almost immediately. Images of coldness "she shut out the cold" are there to allow the reader picture the scene in their minds and to imagine what the place is like. Porphyria enters the poem and we see the lover's adoration for her, and how her beauty is never ending. We see the forbidden nature of their relationship "from pride, and vainer ties". Both Porphyria and her lover love each other but they cannot be together because of the difference in class. He even has doubts about if she loves him or not because they are always away from each other. But he then realises that she really does like him "Porphyria worshipped me". ...read more.

He wants them to sleep together "like emorus birds of prey". The poem looks like a normal traditional love poem the first few times it is read but really it is all about him using his flattery so that he can sleep with her. His flattery is the main convention but he does it for his own reasons, not for the love of his woman. This is a good example of twists in the poems conventions that are found in very little love poems. The next poem is Liz Lockhead's 'The Other Woman', a post 1900 poem. Quickly into the poem, the theme is introduced. "The other woman" "lies". Fro this we can tell that it is not a cheerful sort of poem and maybe unconventional. The poem is about her belief that her husband is having an affair and how it is tearing the relationship apart "between us like a bolster". She sees the other woman as nothing and doesn't want to have anything to do with her yet she sees that she has power over her relationship with her husband "sneezing irritant". She is also referred to as "feathers". This is also another example of how she is nothing. But then we see the other side to her. The powerful side "hardened words turn machine gun". ...read more.

In the third line of this stanza, the theme of the poem is summed up "moaned that he had never wanted this". This reflects the bad feeling throughout the poem and the feeling of insecurity. He realises that by sleeping with her, He still hasn't got what he really wanted. It s not just a poem about love but also about the traumatic problems that people have in alter life after being abused or not treated properly in childhood. It sums up the insecurity and how the person finds it hard to find love. He thought that he could find love by sleeping with a woman but then realises that this isn't true. I think that these four poems have similar conventions but the pre 1900 poems are different to the post 1900 in that the post 1900 poems are poems about s*x and how much they want it in their relationships and the pre 1900 poems are about obsession and how they want to keep their moment of love forever. This is mainly due to the fact that they are all written at different periods in time. 'The other woman' and 'Porphyria's lover' are both about obsession and are written both pre 1900. 'To his coy mistress' and 'howling for love' are both about s*x. So after reading and analysing two pre 1900 poems and two post 1900 poems, I can see that there is obviously a literary tradition in the writing of love poems. ...read more.