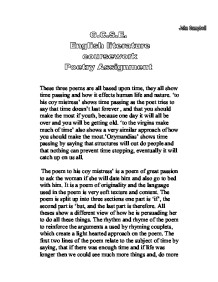 These three poems are all based upon time, they all show time passing and how it effects human life and nature. 'to his coy

These three poems are all based upon time, they all show time passing and how it effects human life and nature. 'to his coy mistress' shows time passing as the poet tries to say that time doesn't last forever , and that you should make the most if youth, because one day it will all be over and you will be getting old. 'to the virgins make much of time' also shows a very similar approach of how you should make the most.'Ozymandias' shows time passing by saying that structures will out do people and that nothing can prevent time stopping, eventually it will catch up on us all. The poem to his coy mistress' is a poem of great passion to ask the woman if she will date him and also go to bed with him. It is a poem of originality and the language used in the poem is very soft texture and content. The poem is split up into three sections one part is 'if', the second part is 'but, and the last part is therefore. All theses show a different view of how he is persuading her to do all these things. ...read more.

The simile 'skin like morning dew' shows a compliment to her, these compliments are used throughout the poem to persuade the woman. Time is showed as negative on line 44 as it says 'throughout the iron gates of life' this shows that time is like a prison and nothing is good about life, it is so simple. To the virgins, make much of time Is very much like to 'his coy mistress' because it shows the passing of time in a person and if you do not use the time and beauty you are given then one day it will all be gone and you will have missed your chance. In this poem the poet uses 'ye' to make the poem seem more direct in the tone, as it targets out a person, this is a very useful word for the writer in the play and helps get the tone just right. Herrick uses 'rosebud' as a metaphor of youth because a rosebud may bloom and look beautiful but one day it will die out and will not look beautiful anymore, that beauty will never come back to that plant and neither will it to you. ...read more.

The dramatic Pause on line 3 creates tension of what is to come. The poet uses alliteration on line 4 to describe the things in which the traveller is seeing which adds effect to the poem. Time is represented by sound and nature which outlives human beings, it doesn't matter how great you are, and time will beat you. The broken statue symbolises not greatness but 'Ozymandias' unimportance. The 'sneer' and the 'frown' still remain this is ironic because he would have had that when he was alive and the tyrants evil still shows on him. The poem I found most appealing was 'Ozymandias' as it had a hard hitting moral in the poem, this moral was that time beats any human and you may have it all, but one day you will die and have nothing. The language in the poem is clever and the alliterations are used to a lot of effect. The tone of the poem is quite fast I thought and the description was fantastic as I had a real good picture in my head. The name 'Ozymandias' is very mysterious and exciting; the word itself stands out as something you would like to read about or find out about it. The poet must have thought a lot about this poem and what purpose it would have on people who read it. ...read more.