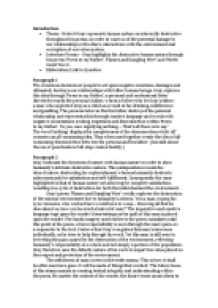 Thesis Robert Gray represents human nature as inherently destructive throughout his poems, in order to warn us of the potential damage

﻿Introduction 1. Thesis ? Robert Gray represents human nature as inherently destructive throughout his poems, in order to warn us of the potential damage to our relationships with others, interactions with the environment and corruption of our value system. 2. Introduce Poems ? Gray highlights the destructive human nature through his poems ?Poem to my Father?, ?Flames and Dangling Wire? and ?North Coast Town?. 3. Elaboration/Link to Question Paragraph 1 The conscious decisions of people to act upon negative emotions, damages and ultimately destroys our relationships with fellow human beings. Gray explores this idea through ?Poem to my Father?, a personal and confessional letter directed towards the persona?s father, whom is believed to be Gray?s father; a man who neglected Gray as a child as a result of his drinking, indifference and gambling. The persona believes that his father destroyed the paternal relationship and represents this through emotive language and words with negative connotations evoking emptiness and disconnection within ?Poem to my Father?. ?In you, now signifying nothing;? That?s all there is to say.? The word ?nothing? displays the completeness of the disconnection while ?all? connotes an all-consuming idea. ...read more.

Yet this man is still seen to be feeling the pain caused by the destruction of the environment, reflecting humanity?s responsibility as a whole and not simply a portion of the population. Gray therefore uses the didactic nature of his work to impart his value placed on the respect and protection of the environment. The selfishness of man is seen in the tenth stanza. ?This is how it shall be after men have gone. It will be made of things that worked.? The future tense of this stanza assists in creating textual integrity and understanding within the poem. No matter the context of the reader, the future tense causes them to reflect upon their actions, furthering Gray?s didacticism within the text. The one phrase reflecting on the past within the stanza however, is ?made of things that worked?. The idea portrayed by Gray is one of comparison. He compares the things ?that worked? - human?s creations which they have dumped - to nature?s creations and processes - things that will continue to work. Thus the comparison used by Gray is effective in exemplifying humanity?s short-term view and ultimately the intrinsic and often subconscious nature of destruction. ...read more.

This lack of environmental concern when contrasted to the simple and natural description of the ?sand crawls by? displays the way in which the values are being destroyed and not simply influenced. This division within the poem allows the reader to structurally see the opposing views Gray presents, specifically the way different and opposing values are able to encroach upon the current values and innocence of people and eventually a town or city. The final line of the poem ?Pass an Abo, not attempting to hitch, outside town.? Alludes to the colonisation of Australia, likening the original colonisation of Australia to the Americanisation of the 1960s and 1970s within Australia. The idea that the Aboriginal man is ?not attempting to hitch? suggests that he is opposed and unaccepting of the occurring urbanisation, whilst also recognizing that he is unlikely to receive an offer. I believe this Aboriginal man within the poem is symbolic of Gray, who is also opposed to the development, but also recognizes his isolation as an artist in a time of progression. Thus displaying the way in which the small town value system was corrupted and defeated by the opposing urban values; values that promote the disregard towards the environment as well as selfishness and pride. ...read more.