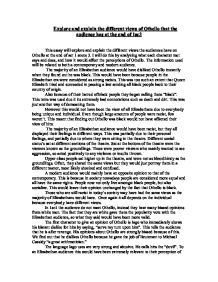 This essay will explore and explain the different views the audiences have on Othello at the end of act 1 scene 3. I will do this by analyzing what each character met says and does, and how it would affect the perceptions of Othello

Explore and explain the different views of Othello that the audience has at the end of 1sc3 This essay will explore and explain the different views the audiences have on Othello at the end of act 1 scene 3. I will do this by analyzing what each character met says and does, and how it would affect the perceptions of Othello. The information used will be related to both a contemporary and modern audience. The majority of an Elizabethan audience would have disliked Othello instantly when they found out he was black. This would have been because people in the Elizabethan era were considered as strong racists. This was too such an extent that Queen Elizabeth tried and succeeded in passing a law sending all black people back to their country of origin. Also because of their hatred of black people they began calling them "black". This term was used due it its extremely bad connotations such as death and dirt. This was just another way of demeaning them. However this would not have been the view of all Elizabethans due to everybody being unique and individual. ...read more.

When Brabantio hears the news that Othello is sleeping with his daughter he responds, as the majority of people would have during that era, angrily. His anger was not only because his daughter was with a black man, but also because she lied to him. Elizabethan males were expected to have their wife and their family under control, so if one went astray it would dent his image in society. Not only was Brabantio's image dented because his daughter went stray, but it was even more heavily due to it being with a black man. This would greatly hurt a proud man like Brabantio Brabantio's disgust leads him to go and try and get Othello killed. When he finds the duke he tries to explain his story to him using stereotypical racist claims such as "witchcraft," and "charms." Many Elizabethans believed black people practiced this so was more than plausible excuse. He also shows his disgust at his daughter by saying "I am glad I have no other child, for thy escape would cause me tyranny." This quote shows how his pride has came even before his love and happiness of his daughter, which in that era may have been acceptable, but is not in modern society. ...read more.

The majority contemporary audience would not like Othello due to their viscous racism and the negative views they had heard. The modern audience would probably see it different because they are more educated and most have social experience with black people. People nowadays would believe that Othello has not done anything wrong and has been victimized because of his skin colour. The opinions negative about him were all biased because they all hated him for a certain reason, so them opinions cannot be valid. Although throughout the essay I have explored what both a modern and contemporary audience would think, not all my answers are correct. This is due to everybody being individual, so I could only stereotype the people of that era. People as individuals have many things that may change there view i.e. sex, age, and upbringing. I, as part of the modern audience believe Othello is being victimized unfairly just because he is a black man. Overall I believe my essay has shown that people maturing and knowledge being gained drastically affects the views of an audience. This is shown by the large gap between a contemporary audiences view and a modern audiences view. ...read more.