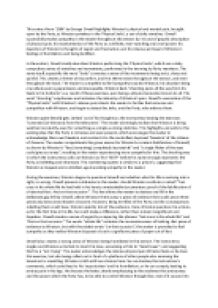 This extract from 1984 by George Orwell highlights Winstons physical and mental pain, brought upon by the Party, as Winston partakes in the Physical Jerks,

Ã¯Â»Â¿This extract from â€˜1984â€™ by George Orwell highlights Winstonâ€™s physical and mental pain, brought upon by the Party, as Winston partakes in the â€˜Physical Jerksâ€™, a set of daily stretches. Orwell successfully evokes sympathy in the reader throughout this extract by: his use of graphic description of physical pain; his representation of the Party as a definite, ever-watching and cruel power; his depiction of Winstonâ€™s thoughts of regret and frustration; and his intense portrayal of Winstonâ€™s feelings of humiliation and being belittled. In the extract, Orwell vividly describes Winston performing the â€˜Physical Jerksâ€™, which are a daily, compulsory series of stretches and movements, performed in the morning by Party members. The name itself, especially the word â€œJerksâ€ connotes a sense of the movements being strict, sharp and painful. This creates a theme of discomfort, and this theme exists throughout the extract, and even throughout the book. The reader is compelled to feel sympathy towards Winston; his situation being one where pain is guaranteed, and inescapable. ...read more.

And on that occasion-â€. This line allows the reader to deduce and fill in the deliberate gap left by Orwell, where Winston threw away a piece of evidence that could prove three previously denounced leaders innocent. However, being terrified of the Party and the consequences rebelling them could have, Winston quickly rids of the evidence. Here, Winston questions his actions, as for the first time in his life, he could make a difference, rather than remain insignificant and hopeless. Orwell creates a sense of regret by comparing the phrases â€œJust once in his whole lifeâ€ and â€œAnd on that occasion.â€ The words â€œwhole lifeâ€ indicates the momentousness of holding that piece of evidence to Winston, but with the added words â€œon that occasionâ€, the reader is provoked to feel sympathy as they realise Winston disposed of such a significant piece of paper out of fear. Orwell also creates a strong sense of Winston being humiliated in this extract. The instructress singles out Winston as he fails to touch his toes, screaming at him to â€œbend lowerâ€, and suggesting that he is â€œnot tryingâ€. ...read more.

Overall, I believe that Orwell successfully and effectively built and maintained sympathy in the reader throughout this extract, both further indulging the reader in the book, and developing the dystopian setting, to prepare for the main events in the plot later in the book. This extract highlights the way in which the Party has complete control over any persons in Oceania. The Party sells the idea of mandatory exercise to the citizens by telling them the government wants to prevent weight problems, but the Party is interested in more than the general health of the population. The â€œPhysical Jerksâ€ are another way the Party displays and demonstrates its undisputable power over the citizens. It is another form of repression and control. This time, though, the control is over people's physical states. The general propaganda is mental control, and the â€œPhysical Jerksâ€ is physical control. Both allow the Party to maintain total control. This theme is prevalent all throughout the book and its appeal and similarity to the modern world is one of the main reasons the book is popular today. ...read more.