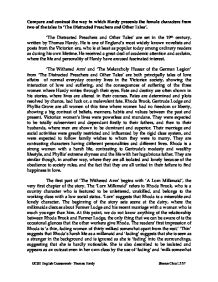 Compare and contrast the way in which Hardy presents the female characters from two of the tales in 'The Distracted Preachers and Other Tales'. 'The Distracted Preachers and Other Tales' are set in the 19th century, written by Thomas Hardy. He is one of England's most widely known novelists and poets from the Victorian era, who is at least as popular today among ordinary readers as during his own lifetime. He received a great deal of academic attention and acclaim, where the life and personality of Hardy have aroused fascinated interest. 'The Withered Arm' and 'The Melancholy Hussar of the German Legion' from 'The Distracted Preachers and Other Tales' are both principally tales of love affairs of normal everyday country lives in the Victorian society, showing the interaction of love and suffering, and the consequences of suffering of the three women where Hardy writes through their eyes. Fate and destiny are often shown in his stories, where lives are altered in their courses. Fates are determined and plots resolved by chance, bad luck or, a malevolent fate. Rhoda Brook, Gertrude Lodge and Phyllis Grove are all women of this time where women had no freedom or liberty, showing a big contrast of beliefs, manners, habits and values between the past and present. Victorian women's lives were powerless and mundane. They were expected to be totally subservient and dependant firstly to their fathers, and then to their husbands, where men are shown to be dominant and superior. Their marriage and social activities were greatly restricted and influenced by the rigid class system, and were expected to follow family wishes to whom they were to marry. They are contrasting characters having different personalities and different lives. Rhoda is a strong woman with a harsh life, contrasting to Gertrude's modesty and wealthy lifestyle, and Phyllis' extreme shyness and the life with her lugubrious father. They are similar though, in another way, where they are all isolated and lonely because of the obedience to society rules, and the fact that they are all united in their failure to find happiness in love. ...read more.

This form great contrast to Rhoda, who seems to know about everything. However, they are similar as the share the same lover, past and present, and that she too, fail to find happiness because of the obedience to society rules. Farmer Lodge and Gertrude share a mundane marriage, where she is inferior, and he is dominant. Unkindness is suggested to have shown to her as she suggests that 'it looks just as if he had flown into a rage and struck me there.' Short-lived love is again shown here after the use of 'evanescent', where there is 'six years of marriage, and only a few months of love', showing an unhappy matrimony because of her afflicted arm, again highlighting that beauty brings her love from Farmer Lodge, and is now lost because 'her grace and beauty was contorted and disfigured in the left limb'. There is a dramatic change of Gertrude's character, where the girl full of generosity, timid and modesty have now changed into 'an irritable, superstitious woman'. The infliction of her 'withered arm' is not of her own doing, but has made a great change in her character, making her obsess 'to experimenting upon her ailment with every quack remedy she came across.' On the other hand, this change shows her genuine love to Farmer Lodge, where 'she was honestly attached to her husband, and was ever secretly hoping against hope to win back his heart by regaining some at least of her personal beauty', causing her to try out all sorts of remedies that she can find. However, this desperation had led her to the lost of friends, happiness and love, driving Farmer Lodge away from her. The readers' empathy to Gertrude would have now disappears as her obsession has become too extreme. She puts her ailment before a life of an innocent, young boy's life, as 'her unconscious prayer was, 'O Lord, hang some guilty or innocent person soon!'' ...read more.

We can also see here that Matth�us Tina is an honourable man as he attempts no persuasion and does 'nothing to tempt her unduly or unfairly'. Hardy has effectively exalted the integrity of the 'foreign barbarian', as he 'would no doubt have turned the balance in his favour'. However, as the story develops, it is revealed that Humphrey's doing is to win her favour in speaking up for his secret marriage, where Phyllis gives up her true love and her future happiness for him. And even though she is now released from Humphrey Gould, she has to live the remainder of her life in regret and with a reputation irreparably damaged. After Matth�us' heartbreaking death of being caught, while Phyllis lived 'she used to keep their mounds neat', suggesting that she loves Matth�us till the minute she dies, again emphasising on their genuine love. Humphrey's existence has ruined her life completely, where she finally found happiness in her prison-like life, but is forced to give it up with no fault of her own at all. Rhoda Brook, Gertrude Lodge and Phyllis Grove are all decent women who end in awful tragedies where they are united in the misfortune in love and the failure in finding real happiness in life. We therefore show compassion towards them where they reminds us of each other. In comparison, I feel most sorry for Phyllis. Her honorable behavior and her faithfulness towards both Humphrey and Matth�us make her ending even more tragic as her moral brings her tragedy. Her loyalty is not being treasured, her obedience is being disregarded, her keeping of her promises is repaid by betrayal and she has to face the death of her love after tearing herself away from him. These are all of no fault of her own, but of the obedience to society rules where I find the story fiercely critical of the Victorian society and in particular the English militarism. ?? ?? ?? ?? GCSE English Coursework- Thomas Hardy Sharon Chiu L53P ...read more.