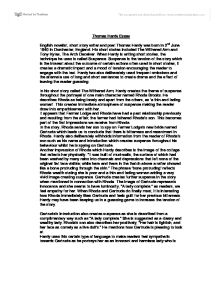 Thomas Hardy Essay English novelist, short story writer and poet Thomas Hardy was born in 2nd June 1840 in Dorchester, England. His short stories included The Withered Arm and Tony Kytes, The Arch Deceiver. When Hardy is writing short stories, the technique he uses is called Suspense. Suspense is the tension of the story which is the interest about the outcome of certain actions often used in short stories, it creates a dramatic impact and a mood of tension encouraging the reader to engage with the text. Hardy has also deliberately used frequent omissions and the alternate use of long and short sentences to create drama and the effect of leaving the reader guessing. In his short story called The Withered Arm, Hardy creates the theme of suspense throughout the portrayal of one main character named Rhoda Brooks. He describes Rhoda as being lonely and apart from the others, as 'a thin and fading woman'. This creates immediate atmosphere of suspense making the reader draw into empathisement with her. It appears that Farmer Lodge and Rhoda have had a past relationship previously and resulting from the affair, the farmer had fathered Rhoda's son. This becomes part of the first impressions we receive from Rhoda. In the story, Rhoda sends her son to spy on Farmer Lodge's new bride named Gertrude which leads us to conclude that there is bitterness and resentment in Rhoda. ...read more.

During this period of the tale, Gertrude's arm had deteriorated affecting her and Farmer Lodge's relationship between their marriage. We know that Farmer Lodge had married her for class and beauty, however, because of her arm, this beauty had gone and he seems to spending more and more time away from her. "Mr and Mrs Lodge's married experience sank into posiness, and worse. The farmer was usually gloomy and silent; the woman whom he had wooed for her grace and beauty was contorted and disfigured in the left limb." Here, we as readers empathise with Gertrude as we believe she is innocent in this point of the story. We are also informed that Gertrude seeks for a cure on her arm to Conjurer Trendle for the second time but alone. When she meets with him, he suggests one remedy for her arm which was to access the corpse of a man who had been hung and to touch the blood from his neck with her disfigured arm. Gertrude then sets out in search for the hangman named Davies, this is where we meet him and read of the fact he talks about his business. "What is going on there? She asked of the ostler. Making the rope for to-morrow." This image is slowly built up as chilling and gruesome for the reader as we see the setting to the hanging of the next day. ...read more.

Another point which builds up to the tension is the final twist Hardy added at the end of the tale which was the revealing of the hanged man, that he was Rhoda and the farmer's son. This also resulted in Gertrude's death. The time omission he had used throughout the sixth chapter leads to a gruesome climax for the reader as Hardy had deliberately left many events and withholds information from the story. Suspense is built up right from the very beginning of the story when Hardy writes how the other two milkmaids working in the farm are gossiping about the farmer and his new bride. "The discussion waxed so warm that the purr of the milk streams become jerky." It is described that the conversation between the two milkmaids had grown so lively. Farmer Lodge then arrives. "Get on with your work, or 'twill be dark afore we have done." Here, the farmer tells the workers to stop gossiping and to continue working. Suspense is present in this section of the tale as the farmer had caught the milkmaids whilst gossiping about him and Gertrude, we also learn of Mr. and Mrs. Lodge through gossip. The theme of suspense that Hardy used throughout the story in the Withered Arm inevitably links the reader to the text which is why I prefer the story of the withered arm to be more successful in creating suspense. ?? ?? ?? ?? ...read more.