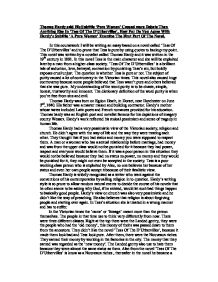 Thomas Hardy said His Subtitle 'Pure Women' Caused more Debate Than Anything Else In 'Tess Of The D'Urbervilles'. How Far Do You Agree With Hardy's Subtitle 'A Pure Women' Examine The First Part Of The Novel.

Thomas Hardy said His Subtitle 'Pure Women' Caused more Debate Than Anything Else In 'Tess Of The D'Urbervilles'. How Far Do You Agree With Hardy's Subtitle 'A Pure Women' Examine The First Part Of The Novel. In this coursework I will be writing an essay based on a novel called 'Tess Of The D'Urbervilles' and to prove that Tess is pure by using quotes to backup my point. This novel was written by a novelist called Thomas Hardy and it was written in the 19th century in 1891. In this novel Tess is the main character and she will be exploited later by a man from a higher-class society. 'Tess Of The D'Urbervilles' is a brilliant tale of seduction, love, betrayal, convection by punishing Tess's sin, but boldly exposes cruel unjust. The question is whether Tess is pure or not. The subject of purity caused a lot of controversy in the Victorian times. This novel also caused huge controversy because some people believed that Tess wasn't pure and others believed that she was pure. My understanding of the word purity is to be chaste, simple, honest, trustworthy and innocent. The dictionary definition of the word purity is when you're free from sins and evil. Thomas Hardy was born on Egdon Heath, in Dorset, near Dorchester on June 2nd, 1840. His father was a master mason and building contractor. Hardy's mother whose tastes included Latin poets and French romances provided for his education. Thomas hardy was an English poet and novelist famous for his depictions of imagery county Wessex. Hardy's work reflected his stoical pessimism and sense of tragedy in human life. Thomas Hardy had a very pessimistic view of the Victorian society, religion and church. He didn't agree with the way of life and the way they were treating each other. They thought that if you had status and money you were supposed to respect them. ...read more.

'I killed the old horse and I suppose I ought to do something to get ye a new one'. This shows us that Tess takes the responsibility because she kill's Prince and she thinks that she has to do something to get to help her parents out. Her parents also wanted her to get married with a gentleman who had money, power and status even if they didn't now him. 'He'll marry her most likely and make a lady of her'. This show us that her mother wants here to marry him and also shows as that her mother wants to fulfil her ambition and don't understand her daughter. When she finds out about this Tess refuses to go because she doesn't want to beg. 'I'd rather try to get work'. This tells us that Tess has her pride and dignity; she's an independent, hard working and she doesn't mind doing all the hard work. Finally Tess decides to go and work for Alec because she has no choice and she wants to look after her family. Tess has always put her family first no matter what happens. 'Tis all my doing - all mine! ... NO excuse for me - none - what will mother and father live on now?' This shows us that Tess is very emotional and feels guilty for what she has done to the horse and now she wants to help her family out. Tess goes to the D'Urbervilles and ends up meeting Alec. Alec is not really a D'Urberville his father simply took the name of the ancient noble family after he built his mansion and retired. Alec is a manipulative, sinister young man, and does everything he can to seduce the inexperienced Tess when she comes to work for his family. Alec flirts with Tess a lot and finds her very attractive. 'Imparted to her developed figure....belied her age. ...read more.

Still, she is troubled by pangs of conscience and feels she should tell Angel about her past. She tries to write him a confessional note and slip it under his door, but it slides under the carpet; Angel never sees it. After their wedding, Angel and Tess both confess indiscretions: Angel tells Tess about an affair he had with an older woman in London, and Tess tells Angel about her history with Alec. Tess forgives Angel, but Angel cannot forgive Tess; he gives her some money and boards a ship bound for Brazil, where he thinks he might establish a farm. He tells Tess he will try to accept her past, but warns her not to contact him until he comes for her. Angel leaves Tess money which she uses to mend her parents house. When her family asks her where she gets the money from she says she got it from Angel because if she lies to them that she is no longer with Angel then they won't have the same respect as before. Tess then decides to work since she has no money for herself and her family. Tess finally finds some work at flintcomb - ash where she has to work really hard. While Tess is working she meets Alec who has converted and is preaching in a barn, Alec is shown to be a hypocrite. Thomas Hardy shows that Alec preaching to show that rich people's life is simple and the poor people have to always endure difficulties. Thomas Hardy juxtaposes to Alec's life to Tess's life so that he can disapprove of the Victorian nouveaux males who use their power to abuse the poor working class women. To conclude I think that Tess is pure because of her innocence which is reflected throughout the story. I strongly believe she is pure and agree with Hardy's subtitle 'A Pure Women'. It is not Tess's fault she gets exploited but her fate, therefore I believe we showed not blame her but her fate. ...read more.