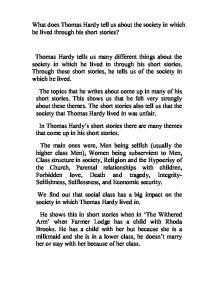 Another example of this is when in 'The Melancholy Hussar of the German Legion' when Humphrey Gould asks Phyllis Grove to marry him. This was unusual in Hardy's time as people from the same class would usually marry each other, not people from a lower class. When Humphrey had gone back to his town, Phyllis fell for one of the soldiers just outside the village, a German Hussar called Matthaus Tina, who she saw walking past her perch on the garden wall one day. It is the "sad and abstracted" expression on Matthaus' face that captures her attention, and it is through this sad expression of Matthaus as homesick and missing his mum that Phyllis' love for Matthaus grows. ...read more.

Her father, suspects she is seeing a soldier, so he takes action and forbids her to leave the garden without his permission. The most contact she had with Matthaus was 'she reached down her hand from the top of the wall, hoping that Matthaus might press it.' Another theme which pops up in Hardy's stories is Parental relationships with children. An example of this is in 'The Son's Veto' when Sophie is taking Randolph to the bandstand in the park. Sophie says 'he have been so comfortable these last few hours that I am sure he can't have missed us!' Her son Randolph replies: 'Has, dear mother--not have, surely you know that by this time!' Exclaimed the public-school boy, with an impatient fastidiousness that was almost harsh. This shows that the two have a relationship but it may not be strong at times because of their different social classes but they still have one. ...read more.