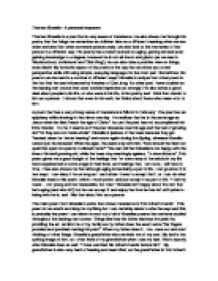 Thomas Kinsella - A personal response Thomas Kinsella is a poet that is very aware of transience. He also shows me through his poetry that the things we remember as children take on a different meaning when we are older and also that when someone passes away, we also look at the memories of that person in a different way. His poetry has a harsh outlook on aging, getting old and even gaining knowledge to a degree, however he is not all doom and gloom (as we see in 'Model school, Inchichore' and 'd**k King'), he can also take a positive view on things, even death! My favourite aspect of his poetry is the way he can show you a new perspective while still using simple, everyday language for the most part. Sometimes, his poems can be read in a number of different ways! Kinsella is unique from other poets in the fact that he was influenced by theories of Carl Jung. No other poet I have studied on the leaving cert course that uses outside inspiration as strongly. He also writes a good deal about people in his life, or who were in his life, in his poetry and I think that stands to him as a person. ...read more.

"You haunt with the taint of age and of vanished good". I like the fact that he remembers those dear to him. It shows that he is more than just a poet to be learned about for an exam, he is a person with people he also holds dear. I too, like to write about those close to my heart a lot. The clarity of Kinsellas memories of his childhood really do show how amazing the human memory can be. He vividly describes the horses' "dipped faces under the fountain in James' street" and how the rain landed "on the cobbles". I also like how Kinsella changes the form of the poem when he switches from reminiscing about time he spent with d**k, to actually describing him as a person and tells us about his life. It becomes a very simple structure to reflect d**k King's simple lifestyle. You can see also in this poem, some of Jung's philosophies. He keenly believed in remembering the past and your childhood. You can tell Kinsella does through his crystal clear imagery. I would also like to remember my childhood and all that has happened with the same kind of clarity that Kinsella can. ...read more.

However there was others that I could like how the dead haunt the present and how memories haunt us. I may be too young to have a lot of experience with getting "haunted" but there are a few things that, try as I might, cannot forget and I can relate to Kinsellas poetry in that way. He has shown that he is a thoughtful person and thinks about family and friends even when working. I love how he can so clearly depict thing that happened to him back when he was as young as 7 or 8 and I hope that I can do that too when I am older. Kinsella's acceptance with death is inspiring and showed me that even when our body grows old and good looks are a thing of the past, you can still continue to carry yourself with pride and grace. It is for these reasons and many more that I have enjoyed studying Kinsella for my leaving cert course, and I plan to look further into his work when I have time after it. He is definitely a poet that I will try to remember when I am an old woman. The End. 2012 words :P ...read more.