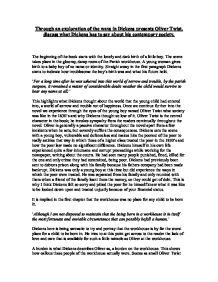 THROUGH AN EXPLORATION OF THE WAYS THAT DICKENS PRESENTS OLIVER TWIST, DISCUSS WHAT DICKENS HAS TO SAY ABOUT HIS CONTEMPORY SOCIETY

Through an exploration of the ways in Dickens presents Oliver Twist, discuss what Dickens has to say about his contempory society. The beginning of the book starts with the lonely and dark birth of a little boy. The scene takes place in the gloomy, damp room of the Parish workhouse. A young woman gives birth to a baby boy of no name or identity. Straight away in the first paragraph Dickens starts to indicate how troublesome the boy's birth was and what his future held. 'For a long time after he was ushered into this world of sorrow and trouble, by the parish surgeon, it remained a matter of considerable doubt weather the child would survive to bear any name at all;' This highlights what Dickens thought about the world that the young child had entered into, a world of sorrow and trouble not of happiness. Once we continue further into the novel we experience through the eyes of the young boy named Oliver Twist what society was like in the 1830's and why Dickens thought so low of it. Oliver Twist is the central character in the book; he invokes sympathy from the readers continually throughout the novel. Oliver is generally a passive character throughout the novel apart from a few incidents when he acts, but severely suffers the consequences. Dickens sets the scene with a young boy, vulnerable and defenceless and makes him the poorest of the poor to really satirise that way in which those of a higher class treated the poor in the 1830's and how the poor law made no significant difference. Dickens himself in his own life experienced quite a few inhumane and corrupt proceedings while working for the newspaper, writing about the courts. He had seen many people punished, fined, killed for the one and only crime they had committed, being poor. Dickens had previously been sent to debtors prison along with his family because his fathers company had been made bankrupt. ...read more.

The master did not just go along with Oliver and place more food into Oliver's bowl, like he should have done as Oliver worked very hard and deserved the food that he needed to keep him on his feet but was shocked and hesitated in dismay before hitting him over the head with the ladle he had in hand. He then grabbed the young Oliver twist and shrieked for the Beadle, Mr Bumble. Dickens exaggerates the way in which the Beadle, the master and board would have reacted at an event such as a young boy, in a workhouse, asking for more food, but it does draw attention to Dickens strong opinion about, how the food was distributed. When Mr Bumble ran into the room where the men of the board sat he was in a rather excitable state. When Mr bumble tells the board of what Oliver Twist had 'offended' there was a great deal of horror amongst the board. 'There was a general start. Horror depicted on every countenance.' Then the man in the white waistcoat who had been so cold towards Oliver's at his and the boards first meeting made a statement that was blown out of all proportions but was an accurate as the poor used to be hung for being of a poor status. 'I know that boy will be hung' No one in the room challenged this statement made by the man in the waistcoat, which would imply that the room to some sort of degree agreed with him. What seems like a harmless action for a child to do in our day, it was prominently frowned upon in Dickens day. Oliver was sent into immediate isolation and confinement and the next morning a bill was put up offering a reward of five pounds to anyone who would take Oliver Twist off the hands of the Parish. So the one thing that Oliver decides to do for himself and the consequences were fatal. ...read more.

'And he wished, as he crept to his narrow bed, that that were his coffin, and that he could be lain in a calm and last sleep in the churchyard ground, and with the tall grass waving gently above his head, and the sound of the old deep bell to soothe him in his sleep.' This was the thought that got Oliver to sleep and through another night, cold and alone. The next morning another character is introduced to the story, as well as charlotte, a young girl who works for the Sowerberrys in the kitchen, there is Noah Claypole, a charity boy. Although a charity boy was low in the rankings of sociable class a workhouse boy was still ranked lower. As some may think you may have suspected that Noah being ill treated by most because of his class would have been nice to Oliver understanding that it would have been appreciated by Oliver as no one had ever thought themselves equal to him (apart from fellow workhouse inmates), but he didn't. Noah is cruel and horrid to Oliver showing him who was in charge. In the eight chapter Oliver meets Fagin, Dickens here explores yet another aspect of society. Fagin is a large man with hidden agendas. Fagin is seen by the young group of children who work for him as a protector and hero, however Fagin is in actual fact using the young children to do his 'dirty work' for him. Fagin teaches the young children to steal money, jewellery and other valuables. If the children return to Fagin after a days work with valuables, then in return Fagin gives the children food and a roof over their heads. This is another aspect of society shown by Dickens in the novel. Even though this group of children and Fagin are thieves, Dickens presents them as an unofficial family, who care and look after one another. I think Dickens wrote this book to show different aspects of society in Victorian times. Through writing this book not only does Dickens entertain the reader he educates the reader to. ...read more.