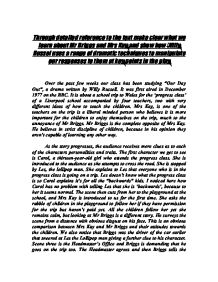 Through detailed reference to the text make clear what we learn about Mr Briggs and Mrs Kay and show how Willy Russel uses a range of dramatic techniques to manipulate our responses to them at key points in the play Over the past few weeks our class has been studying "Our Day Out", a drama written by Willy Russell. It was first aired in December 1977 on the BBC. It is about a school trip to Wales for the 'progress class' of a Liverpool school accompanied by four teachers, two with very different ideas of how to teach the children. Mrs Kay, is one of the teachers on the trip is a liberal minded person who believes it is more important for the children to enjoy themselves on the trip, much to the annoyance of Mr Briggs. Mr Briggs is the complete opposite of Mrs Kay. He believes in strict discipline of children, because in his opinion they aren't capable of learning any other way. As the story progresses, the audience receives more clues as to each of the characters personalities and traits. The first character we get to see is Carol, a thirteen-year-old girl who attends the progress class. She is introduced to the audience as she attempts to cross the road. She is stopped by Les, the lollipop man. She explains to Les that everyone who is in the progress class is going on a trip. Les doesn't know what the progress class is so Carol explains it's for all the "backwards" kids. I noticed here how Carol has no problem with telling Les that she is 'backwards', because to her it seems normal. The scene then cuts from her to the playground at the school, and Mrs Kay is introduced to us for the first time. She asks the rabble of children in the playground to follow her if they have permission for the trip but haven't paid yet. ...read more.

Once they are all back on the coach they carry on their journey to Conwy castle, Briggs sits down next to Colin, one of the other teachers and explains his theory about Mrs Kay. Briggs is conspiratorial in the way he tries to force his views onto Colin, accusing Mrs Kay of setting herself up as, "the champion of the non-academics. He claims he can see through her, "woolly minded liberalism". Mrs Kay had actually instructed the driver to turn in at the Zoo. When Briggs realises something is wrong, he heads to the front of the Bus to where Mrs Kay is standing. At this point we get to see the strong side of Mrs Kay's character as she totally ignores Mr Briggs's comments and continues to inform the children of their new destination, Briggs: "Look we cant...." Mrs Kay: "Now the rest of the staff and myself..." This scene is best conveyed on the video as you get an actual sense of Mrs Kay ignoring Mr Briggs while speaking to the children. It suggests that Mrs Kay cares more about what the children think and what they have to say rather than Mr Briggs's opinions. Barry Hines uses stage directions here to tell the actress portraying Mrs Kay to ignore what Briggs is saying to make sure that the audience sees the chemistry between Mrs Kay and Mr Briggs. Also, at the end of Mrs Kay's speech she forces Mr Briggs to adapt to the situation because Mrs Kay informs the children that Mr Briggs is an expert in animals and that he can show them around. Mr Briggs is forced to walk around and listen to the children and get to know them a little better. Next is further proof that Liverpool is the source of everything bad in Mr Briggs. As he escapes the Bus and therefore in his mind is now no longer attached to the school and Liverpool, he begins to 'lighten up' a little, speaking to the children as if they are on his level. ...read more.

Mrs Kay takes a photo of Briggs singing along with the children, and Mr Briggs doesn't seem to notice. It's only as the coach enters Liverpool that the mood changes once again. Every one is unhappy with the thought of going back to the drudgery of school life. Mr Briggs then begins his final transformation. He wakes up seeing the familiar surroundings, and straightens his tie, removes his cowboy hat and puts on his jacket. This goes further to prove the point I made earlier of Hines associating Liverpool with Briggs's character and the source of the children's bad behaviour. Briggs approaches Mrs Kay who is taking the completed film out of her camera. Mrs Kay informs Briggs that there are some photos of him 'enjoying' himself. Briggs tells Mrs Kay that he will develop them at school for her, and she is shocked by the kind gesture but agrees. As everyone is leaving Mrs Kay invites Briggs down to the pub with the rest of the teachers but he declines. As the car pulls away Briggs reaches into his pocket and pulls out the undeveloped film. He opens it and exposes it to the light and then crumples it back in his pocket, erasing all traces of his 'good time' on the trip. This shows that although Briggs has changed, he still thinks of his reputation first to make sure he doesn't lose any respect from the children because in his eyes the fear he causes are a measure of his teaching skills. In conclusion, I would say that if I had to pick who was the better teacher it would be Mr Briggs, even though I would rather Mrs Kay teach me because she is less strict, but for the teaching system to work there must be rules. Barry Hines shows these points and uses association to exaggerate the message. Using Liverpool as the source meant he could bring it up anywhere and the characters would change accordingly. Even the thought of Liverpool was enough for some characters to instantly change, making them react differently to situations. By Oliver Browne 11.1 ...read more.