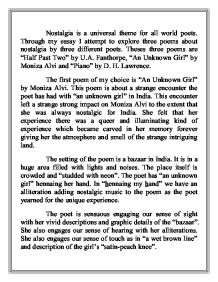 Through my essay I attempt to explore three poems about nostalgia by three different poets. Theses three poems are &quot;Half Past Two&quot; by U.A. Fanthorpe, &quot;An Unknown Girl&quot; by Moniza Alvi and &quot;Piano&quot; by D. H. Lawrence.

Nostalgia is a universal theme for all world poets. Through my essay I attempt to explore three poems about nostalgia by three different poets. Theses three poems are "Half Past Two" by U.A. Fanthorpe, "An Unknown Girl" by Moniza Alvi and "Piano" by D. H. Lawrence. The first poem of my choice is "An Unknown Girl" by Moniza Alvi. This poem is about a strange encounter the poet has had with "an unknown girl" in India. This encounter left a strange strong impact on Moniza Alvi to the extent that she was always nostalgic for India. She felt that her experience there was a queer and illuminating kind of experience which became carved in her memory forever giving her the atmosphere and smell of the strange intriguing land. The setting of the poem is a bazaar in India. It is in a huge area filled with lights and noises. The place itself is crowded and "studded with neon". The poet has "an unknown girl" hennaing her hand. In "hennaing my hand" we have an alliteration adding nostalgic music to the poem as the poet yearned for the unique experience. ...read more.

The sensuous poet engages our sense of hearing to the utmost extent by his usage of words as "boom" and "tingling". He tries to convey to us the echoing sound of music all around him as a child and how he was marveled in relishing it. The onomatopoeia in "boom" is quite impressive making us hear the musical echo with him. The sensuous poet here makes full use of the auditory images. Similarly, "An Unknown Girl" reveals to us how its poet is sensuous engaging our sense of hearing with her use of remarkable auditory images such as the alliteration in " hennaing my hand " adding music of nostalgia and " stare with their western perms adding eerie music to the poem. Lawrence is immersed in nostalgia as he describes his childhood memories with graphic details. Still the effect is very delicate and evokes all relaxation and pleasure in us. We almost see his lovely mother "pressing" her "small, poised feet" on the lower parts of the piano. When we are informed that she "smiles as she sings" we again feel the poet's nostalgia for happy family life. ...read more.

The other two poets are also sensuous. Hardy engages our sense of hearing as he outstates "Softly, in the dusk, a woman is singing to me". While, Moniza Alvi is also sensuous engaging our sense of touch through expressions like "on her satin - peach knee". The poet in "Half Past Two" is nostalgic for the world of imagination during childhood. Hardy is nostalgic for his happy childhood and peaceful family life. Alvi is nostalgic for the Indian bazaar and the intrigue she felt there. (9 /10) When the teacher urged the boy to go home, he shifted from the zone of imagination to the zone of the reality. Similarly, in Hardy's poem, he shifts us from his stage of adulthood to his childhood and back once more to his adulthood. Fanthorpe's poem transferred us to the world of fantasy and imagination. The boy yearned for the land of forgetfulness and "the clocklessl and of ever" where children escape from reality to illusion i.e. To the word of magic where time is "tickless waiting to be born". The above mentioned three poems are about the theme of nostalgia. I have enjoyed them immensely and I consider them really memorable. (10 / 10) ...read more.