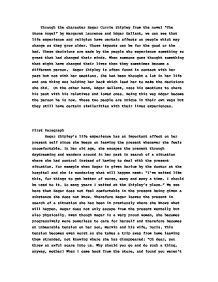 Through the character Hagar Currie Shipley from the novel &quot;The Stone Angel&quot; by Margaret Laurence and Edgar Gallant, we can see that life experience and religion have certain affects on people which may change as they grow older

Through the character Hagar Currie Shipley from the novel "The Stone Angel" by Margaret Laurence and Edgar Gallant, we can see that life experience and religion have certain affects on people which may change as they grow older. Those impacts can be for the good or the bad. These decisions are made by the people who experience something so great that had changed their minds. When someone goes thought something that might have changed their lives then they sometimes become a different person. Hagar Shipley is often found in contact with her past but not with her emotions. She had been thought a lot in her life and one thing was holding her back which lead her to make the decisions she did. On the other hand, Edgar Gallant, uses his emotions to share his past with his relatives and loved ones. Being this way Edgar became the person he is now. These two people are unique in their own ways but they still have certain similarities with their lives experiences. First Paragraph Hagar Shipley's life experience has an important affect on her present self since she keeps on leaving the present whenever she feels uncomfortable. In her old age, she escapes the present through daydreaming and wanders around in her past in search of a situation where she had control instead of having to deal with the present situation. For example when Hagar is given Barium by the doctor at the hospital and she is wondering what will happen next: "I've waited like this, for things to get better of worse, many and many a time. ...read more.

From this quote, we can see that Hagar's pride comes directly from her father. Hagar once said:" "Pride was my wilderness and the demon that led me there was fear." She has been afraid of being unrespectable which is why she decided to go to college and was easily convinced that it was she that should go and not Matt. Afraid of needing too much and giving too much, Hagar's pride is both unsettling and inspirational. Second Paragraph Edgar Gallant's life experience and past memories have an important effect on his life and relationships with others. Edgar had a very interesting past that affects him even today. His past affects his career as a volunteer in the later years of his life as he helps out others with his knowledge. He has been asked to take part in over a dozen organizations due to his previous success in his life's work. Not thinking he has fulfilled his dream and what he was sent here to do, he has accepted to help out in about nine different association for the public usually as a president or vice president of comities. Edgar Gallant uses his past, not to hide, but to enrich his every day's work. Unlike Hagar, Edgar has usually worked in a team thinking that several brains are better then one, sharing information to reach a better solution that one could not come up with alone. ...read more.

He also did not let religion take over his life which enabled him to work more frequently. From her childhood as a daughter of a Scottish merchant to her marriage, Hagar has fought a long and wrong battle for freedom and respect. In the end she realises her wrong doings when it became too late, she has gone with her life without thinking about her actions and the consequences. When someone does not know if they are at fault they keep repeating those actions until its too late to reverse them. Edgar on the other hand has nothing to look back on, he knew exactly what he wanted and went right for it. In Edgar's case he was raised by and worked hard to earn respect which in the end he was granted respect by others. The work he has done for the society is incredible and he is still doing so in a manner that will benefit the society and him self. He will not stop working until he probably can't function anymore. The benefit that he is getting out of it is the joy of being able to make a difference. Hagar unfortunately realized this near the end of her life, when time was running out. She realized this when she only performed one task to help out the girl in the hospital. If only she realised that helping others is rewarding and makes a difference, then she could have started at an earlier age. Whether it's a person's character or religion, as one grows older their views change. This could include a change in heart or opinion. ...read more.