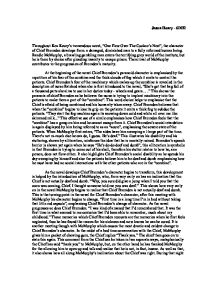 Throughout Ken Kesey's tremendous novel, &quot;One Flew Over The Cuckoo's Nest&quot;, the character of Chief Bromden develops from: a damaged, diminished man to a fully reformed human being.

Jason Henry - 6DH2 Throughout Ken Kesey's tremendous novel, "One Flew Over The Cuckoo's Nest", the character of Chief Bromden develops from: a damaged, diminished man to a fully reformed human being. Randle McMurphy, a brawling gambling man enters the terrifying grey world of the institute, but he is there by choice after pleading insanity to escape prison. The arrival of McMurphy contributes to the progression of Bromden's maturity. At the beginning of the novel Chief Bromden's paranoid character is emphasised by the repetition of his fear of the combine and the thick clouds of fog which it emits to control the patients. Chief Bromden's fear of the machinery which makes up the combine is revealed in the description of nurse Ratched when she is first introduced to the novel, "She's got that bag full of a thousand parts she aims to use in her duties today - wheels and gears . . ." This shows the paranoia of chief Bromden as he believes the nurse is trying to implant machinery into the patients to make them a part of the "combine". This word choice helps to emphasise that the Chief is afraid of being combined and his humanity taken away. ...read more.

the other hand he has thanked McMurphy for the allowing him to open up and talk and realise that he is not, in fact, insane. As well as that, it also shows how all along McMurphy's inclination about the Chief was right. During that night time conversation with McMurphy the Chief talks about how small he is, demonstrating how the "combine" has affected him. "You're... lot bigger, tougher'n I am." McMurphy then replies, "You stand a head taller'n any man on the ward. There ain't a man here you couldn't turn every way but loose, and that's a fact!" The Chief then dismisses this comment "No. I'm way too little. I used to be big, but not no more. You're twice the size of me." This repetitive 'negative', "Not no more", illustrates how he feels negative towards himself too, and how broken a man he is due to his time spent in the combine. McMurphy realises that, with the size of the Chief, he could use him to lift the control panel which he hadn't been able to lift at the beginning of the novel. He begins to build up the chief's morale by complementing him in a descriptive metaphor, giving an image of how life will change for the good, "Oh man I tell you, you'll have women trippin' you and beatin' you to the floor." ...read more.

got total control over McMurphy, even though he is not literally hobbled, as in cannot walk properly, he cannot think for himself, is a vegetable, he is "hobbled". However though, the path the Chief ventures out on after escaping from the hospital is the same as the ill fated dog took earlier on in the novel when chasing a goose as it met the oncoming headlights of a vehicle, thus emphasising the battle between animals and machinery and how machinery will always win. In conclusion Chief Bromden's character develops extensively through out the novel from being a fully fledged member of the "chronics" to conversing with McMurphy and even going on a fishing trip with the other patients. As the novel develops the Chief "grows" back to his original size, commits an empathy killing on McMurphy to save him from the life of a chronic and escapes from the grasp of the "combine." However, the reader is left in a state of uncertainty at the end of the novel as they are unsure whether the story is being told by the Chief as a free man out with the hospital or if the combine have taken him back into their tight grasp and he is telling the story from recollection to another inmate. ...read more.