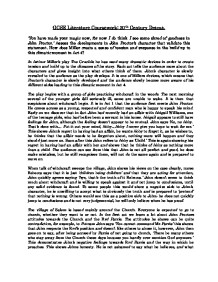 GCSE Literature Coursework: 20th Century Drama. 'You have made your magic now, for now I do think I see some shred of goodness in John Proctor.' Assess the developments in John Proctor's character that validate this statement. How does Miller create a sense of tension and suspense in the build up to this climatic moment in Act 4? In Arthur Miller's play The Crucible he has used many dramatic devices in order to create tension and build up to the climaxes of the story. Each act tells the audience more about the characters and gives insight into what others think of them. John's character is slowly revealed to the audience as the play develops. It is one of Millers devices, which means that Proctor's character is slowly developed and the audience slowly become more aware of his different sides leading to this climatic moment in Act 4. The play begins with a group of girls practicing witchcraft in the woods. The next morning several of the younger girls fall seriously ill, some are unable to wake. It is then that suspicions about witchcraft begin. It is in Act 1 that the audience first meets John Proctor. He comes across as a young, respected and confident man who is happy to speak his mind. Early on we discover that in fact John had recently had an affair with Abigail Williams, one of the teenage girls, who had before been a servant in his house. Abigail appears to still have feelings for John, although the feeling doesn't appear to be mutual. John says 'No, no Abby. That's done with... Put it out your mind, Abby...Abby I never give you hope to wait for me.' This shows John's regret in having had an affair, he wants Abby to forget it, as he wishes to, he thinks that the affair needs to be forgotten about, nothing more will happen and they should just move on. ...read more.

In this passage John tells Elizabeth how ashamed he is of what he has done, he is a good man really, and is honest about his feelings. Elizabeth however quickly reacts, saying that if he really thinks that, he should go and tell Abby. It is at this point that their conflicting perspectives about the affair collide - John knows he is wrong, and wants to move on, but feels that Elizabeth will never forget it, so they wont be able to move on. The passage which shows this is, John - 'Your spirit twists around the single error of my life, and I will never tear free of it.' Elizabeth - 'You will tear free of it when you come to know that I will be your only wife, or no wife at all.' Elizabeth does love John and just wants him to realise that she is all he will have. The audience can again see the tension between the two, some may feel sympathetic towards John for Elizabeth's harsh words, others may hold it against John to show his negative sides, as it is his fault he is in this mess. When Proctor and Hale meet, Hale questions Johns decisions about his three children, 'How comes it that only two are baptized?' Proctor - '...I see no light of God in that man. I'll not conceal it.' We again see John's negative feelings towards the Church and Rvd Parris. From this we can see more of John's honest side, he isn't ashamed of what he thinks and is willing to tell others about his thoughts too. Hale asks John to recite the Commandments, which John does, however he repeats one of them twice. When he does Hale points it out, John agrees but doesn't correct himself. It is then that Elizabeth adds the commandment he missed out; 'Adultery, John' John then pauses and agrees. ...read more.

Throughout their small talk, they use many short and exclamatory phrases, 'Praise God!' 'Why, John!' These help to increase the pace of the act towards the climax, they increase the volume, so therefore the suspense and emotion too. Sudden silences also build up the tension; the audience want to be inside the characters minds to hear what they are thinking. P107 indicates that 'The emotion flowing between them prevents anyone from speaking for an instant.' This quizzes the minds of the audience. Throughout the play the audience is able to, many years on, relate to the witch-hunts as in a real situation, due to the McCarthy communist witchcraft events. The play is a parable for the McCarthy era, in which similar Witch hunts' occurred targeting citizens as communists rather than disciples of Satan. Therefore the entire story is more 'alive' and the audience are able to become more involved. By the time we get to the climatic moment in Act 4, the audience feels that John has more than just a 'shred' of goodness in him. The many methods of tension build up to the climax of John's decision to admit that he hasn't in fact been in contact with the devil, and that he is innocent, so will therefore die for it. The quote; 'You have made your magic now, for now I do think I see some shred of goodness in John Proctor,' creates dramatic irony before his death. The actual goodness in John Proctor has been shown throughout the play in his honesty and openness, whereas the statement says that witchcraft has turned him into a good person. John Proctor has been a good, honest man from the beginning of the play; it was only in Act 3 when he was accused of witchcraft that he was dishonest. This goes against the statement and supports John's character; he always was a good character and will now die, a good honest man, right with God. ...read more.