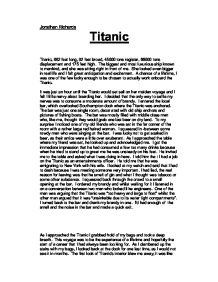 Titanic. It was just an hour until the Titanic would set sail on her maiden voyage and I felt I little nervy about boarding her. I decided that the only way to settle my nerves was to consume a moderate amount of brandy.

Jonathan Richards Titanic Titanic, 882 feet long, 92 feet broad, 45000 tons register, 66000 tons displacement and 175 feet high. The biggest and most luxurious ship known to mankind, and she was sitting right in front of me. She looked even bigger in real life and I felt great anticipation and excitement. A chance of a lifetime, I was one of the few lucky enough to be chosen to actually work onboard the Titanic. It was just an hour until the Titanic would set sail on her maiden voyage and I felt I little nervy about boarding her. I decided that the only way to settle my nerves was to consume a moderate amount of brandy. I entered the local bar, which overlooked Southampton dock where the Titanic was anchored. The bar was just one single room, decorated with old ship anchors and pictures of fishing boats. The bar was mostly filled with middle class men who, like me, thought they would grab one last beer on dry land. To my surprise I noticed one of my old friends who was sat in the far corner of the room with a rather large red haired woman. I squeezed in-between some rowdy men who were singing at the bar. I was lucky not to get soaked in beer, as their antics were a little over exuberant. As I approached the table where my friend was sat, he looked up and acknowledged me. I got the immediate impression that he had consumed a few too many drinks because when he tried to stand up to greet me he was unsteady on his feet. He invited me to the table and asked what I was doing in here. I told him that I had a job on the Titanic as an entertainments officer. He told me that he was emigrating to New York with his wife. ...read more.

I asked where they had gone and they said that they had just gone for a wander and to get the drinks. After drinking the coffee, the three of us set off down to the main deck to start work. We arrived at the dining room a little while later on to find some of the first class passengers attending the early breakfast. I organised the entertainment for the morning, which included, magic tricks for the children, poker and other card games, singers, musicians and even artists. The ship was looking quite busy after picking up the rest of the passengers from Cherbourg, which meant there were a lot of people to be entertained. This meant more work for me. I had to stroll around the ship checking that the passengers were being entertained as well as organising the afternoon's entertainment. As I passed through the caf� I was greeted by one of the casino entertainers who explained to me that he could not shuffle because he has broken his wrist in a rather nasty accident last night. He asked if it was possible for me to take over for him. I would normally have declined but I had little else to do until later on this afternoon so I accepted. I walked to the poker room with the injured man and then took up my seat at the table as the croupier. I had limited experience in this sort of thing and was a little apprehensive to say the least. I took a deep breath and started to deal the cards. After several games and what seemed to be large amounts of money being wagered, I was relieved of my temporary duty by another member of staff. I was pleased with my performance but also glad to leave the table. It was early afternoon now and I was feeling rather hungry, especially after having no breakfast. I decided that I would just visit the caf� to get a sandwich and maybe a cake. ...read more.

I remember the wind rushing through my hair as I fell and narrowly missing the propellers. It felt like I was falling for minutes rather than seconds. The water was freezing cold and I felt chilled to the bone. I knew that I had to keep moving and swim away from the sinking ship to avoid being dragged under with it. I managed to grab hold of a piece of floating debris, which would aid me in staying afloat and hopefully conserve some of my energy. My only chance now was to get myself in the proximity of a lifeboat. Out of sheer chance a lifeboat came nearby and I knew that it was now or never. I blew my whistle as hard as I could. It took me a few breaths to make any sound at all. Luckily one of the men onboard heard my whistle and called out to me. I kept on whistling as loud as I could. Finally the boat came by along side me and two men pulled me up out of the water. The men wrapped me in some blankets and sat me down. I looked around still shivering violently and to my amazement the lifeboat was nearly empty. I pleaded with the men to go back for more survivors but they said that they would only get sucked under with the Titanic. They rowed the ship well out of range of the Titanic so we could only see minute dots falling from the ship. We watched as the world's largest man-made moving object was sucked under by the Atlantic Ocean. We watched it until the last piece was submerged. I knew very well that there must have been over one thousand people that had perished and quite possibly my friends as well. This truly was the worst thing that could have happened. I sat there in the lifeboat for the next two hours waiting to be picked up by the nearest ship, those two hours were the longest of my life. ...read more.