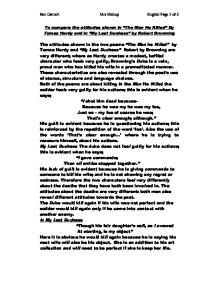 To compare the attitudes shown in &quot;The Man He Killed&quot; By Tomas Hardy and in &quot;My Last Duchess&quot; by Robert Browning

To compare the attitudes shown in "The Man He Killed" By Tomas Hardy and in "My Last Duchess" by Robert Browning The attitudes shown in the two poems "The Man he Killed" by Tomas Hardy and "My Last Duchess" Robert by Browning are very different; where as Hardy creates a modest, baffled character who feels very guilty, Browning's Duke is a vain, proud man who has killed his wife in a premeditated manner. These characteristics are also revealed through the poet's use of stanza, structure and language choices. Both of the poems are about killing In the Man He Killed the solider feels very guilty for his actions; this is evident when he says; "I shot him dead because- Because he was my he was my foe, Just so - my foe of coarse he was; That's clear enough; although." ...read more.

In My Last Duchess "Though his fair daughter's self, as I avowed At starting, is my object" Here it is obvious he would kill again because he is saying his next wife will also be his object. She is an addition to his art collection and will need to be perfect if she is keep her life. The protagonist in 'The man he killed' would probably kill again if placed in the sa me position. In The Man He Killed "But ranged as infantry And staring face to face." If he was put in that position again then he might shoot to kill somebody to save his life. However In the Man he Killed it seems that the man would only kill again if he was forced to. The men both display different attitudes towards their actions. ...read more.

This quote shows that the attitudes of the two characters are extremely different. In the two poems both Thomas Hardy and, Robert Browning use enjambment, to emphasise what they are saying, and to reflect on the naturalistic speech. In The Man He Killed "That's clear enough; although He thought he'd list perhaps " Here enjambment is used to show the hesitation, the moment he realises that the other man was just like him. In My Last Duchess,' enjambment is used in a different way "I gave commands; Then all smiles stopped together" The Duke is thinking about what he has done - the audience are encouraged to reflect on this and are naturally shocked at what he has done. This quote shows that both writers used enjambment in two different ways, to emphasize their character's actions towards the deaths that have occurred. ?? ?? ?? ?? Ben Garnett Mrs Bishop English Page 1 of 3 ...read more.