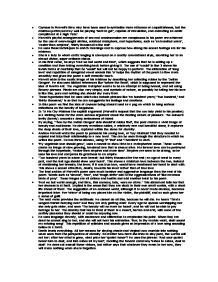 To his Coy Mistress

* Coyness in Marvell's time may have been used to symbolize mere reticence or coquettishness, but the mistress portrayed may well be playing 'hard to get', capable of calculation, and extracting an erotic compliment at a high 'rate'. * Marvell's playful entanglements of sex and condescension are conspicuous in his poem are achieved by the use of overwrought similes, outsized metaphors, and hyperboles, such as 'an hundred years', 'vaster than empires', 'thirty thousand to the rest'. * He uses these techniques to enrich meanings and to express how strong his sexual feelings are for his mistress. * She is a lady to whom erotic longing is conveyed on a courtly conventional style, elevating her to an almost divine, super ordinate status. * In his first verse, he says 'Had we but world and time', which suggests that he is setting up a condition and then taking everything back before giving it. The use of 'would' in line 3 shows his lavish forms of courtship that he 'would' but will not be happy to perform. The alliteration of 'long love' and repetition of elongated vowel sounds like 'o' helps the rhythm of the poem to flow more smoothly and gives the poem a soft romantic touch. ...read more.

His forever love can be portrayed through the hyperbole, 'vaster than empires and more slow'. Empires are seen to be strong, so he uses his love and compares its greatness to an empire. * 'Two hundred years to adore each breast; but thirty thousand for the rest; an age at least to every part, and the last age should show your heart'. This shows a mistaken love between the two, instead of mentioning her breasts, the lover, if it was true love, would have mentioned her heart to start with. This shows a sexual attraction, desire, towards his lover rather than of true love. * The final section of Marvell's poem uses much harsher and aggressive language than the rest of his poem. Words such as 'devour', 'tear', and 'rough strife' add to the aggressiveness of 'like amorous birds of prey'. These images are all callous and hostile and add another twist to his poem. * 'Had we but world enough, and time, this coyness, lady, were no crime.' This statement tells her that her shyness is at fault. Implied is the sense that they are stuck in their own small worlds, with a short life ahead of them. ...read more.

them - the obvious mention of her youth, the use of morning dew, because they are in the morning of their lives, and dew is fresh and sparkling - all qualities associated with being young and free. * Their identities are linked together in this paragraph, he uses the words we and us where previous he had used thou and I. He repeats the word now, and uses the present tense.'And now, like amorous birds of prey, rather at once our time devour,' Birds of prey are strong, cruel, but sleek, beautiful and fast. They are also killing machines, and would devour time, rip it apart, and consume it totally. He suggests it is better that they use time, slice it up and make the most of every day, than let Time keep a grip on them. Time is personified as someone they have to escape from, which makes the threat and pressu re more real than if it was simply an abstraction. * 'Thus, though we cannot make our sun stand still, we can make him run.' Although they cannot stop time, they can make the time fly by in a daze of love. This can be summed up in the latin phrase 'Carpe Diem' - seize the day. ...read more.