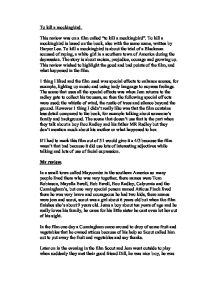 To kill a mocking bird

To kill a mockingbird. This review was on a film called "to kill a mockingbird". To kill a mockingbird is based on the book, also with the same name, written by Harper Lee. To kill a mockingbird is about the trial of a Blackman accused of r****g, a white girl in a southern town of America during the depression. The story is about r****m, prejudice, courage and growing up. This review wished to highlight the good and bad points of the film, and what happened in the film. 1 thing I liked and the film used was special effects to enhance scenes, for example, lighting up music and using body language to express feelings. The scene that uses all the special effects was when Jem returns to the radley gate to collect his trousers, so then the following special effects were used; the whistle of wind, the rustle of trees and silence beyond the ground. However 1 thing I didn't really like was that the film contains less detail compared to the book, for example talking about someone's family and background. The scene that doesn't use that is the part when they talk about a boy Boo Radley and his father MR Radley but they don't mention much about his mother or what happened to her. If I had to mark this film out of 5 I would give it a 4/5 because the film wasn't that bad because it did use lots of interesting adjectives while talking and lots of use of facial expression. ...read more.

was at some person so then Scout got really scared but then surprisingly Jem returned with his trousers when their father Attcus called them in because it was bed time. Afterwards when he tucked them in bed Atticus came outside suddenly when Maycombe' s sheriff came by to ask and tell something to him and that was in Maycombe a black man named Tom Robinson was accused of r****g a white girl named Mayella Ewell so if he wanted to would he be Tom Robinson' s lawyer so Atticus said yes. In the film the next morning it was the first day of school for Jem and Scout, but Scout didn't want to go because she had to wear a dress, which se didn't really like because she was a tomboy but Jem was really excited that he didn't eat his breakfast or say hi to Atticus or his auntie who came over so he ran out of the house when Atticus called him back in to wait for scout who was being stubborn to come out and have her breakfast suddenly when their cook Calpurnia called her out to come and eat her breakfast so she did meanwhile Jem was forcing her to hurry up so she forgot about eating her breakfast and ran out of the house with Jem who forgot to get his bag and lunchbox so he had to come back and get it. ...read more.

When he got there the court was packed with people again. Later on before the court case had started Jem and Scout secretly went there to see what happened, they got through into the courtroom they said it was really hot so then the case had started. In the case there was so many evidences against Mayella but Tom didn't win he wasn't free he was put in jail for the rest of his life or he could have got a severe punishment for which he didn't do. So then all Tom' s friends stood up from their seats to Atticus to show some respect that they don't blame Atticus that he didn't do his best. More lately in the film all I can remember is that: * Scout had a little show to do in school and she was the ham. * After the show scout had lost all her clothes so Jem asked her to come back on Sunday and ask the teachers to open it up for her. * When they were going home MR Ewell attacked Scout and Jem. * Jem got hurt but Scout didn't because Boo came to save them. * At the end of the film Boo turned out to be a nice man. * All Boo wanted to do is protect Jem and Scout from bad people. * If you had watched that film you would have found out that rumours are not always true. ...read more.