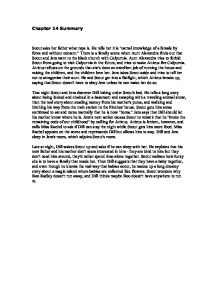 Chapter 14 Summary Scout asks her father what rape is. He tells her it is "carnal knowledge of a female by force and without consent." There is a family scene when Aunt Alexandra finds out that Scout and Jem went to the black church with Calpurnia. Aunt Alexandra tries to forbid Scout from going to visit Calpurnia in the future, and tries to make Atticus fire Calpurnia. Atticus refuses on the grounds that she's done an excellent job of running the house and raising the children, and the children love her. Jem takes Scout aside and tries to tell her not to antagonize their aunt. He and Scout get into a fistfight, which Atticus breaks up, saying that Scout doesn't have to obey Jem unless he can make her do so. That night Scout and Jem discover Dill hiding under Scout's bed. He tells a long story about being locked and chained in a basement and escaping with a traveling animal show, then the real story about stealing money from his mother's purse, and walking and hitching his way from the train station to the Finches' house. Scout gets him some cornbread to eat and notes mentally that he is now "home." Jem says that Dill should let his mother know where he is. Jem�s next action causes Scout to remark that he "broke the remaining code of our childhood" by calling for Atticus. Atticus is lenient, however, and calls Miss Rachel to ask if Dill can stay the night while Scout gets him more food. Miss Rachel appears on the scene and reprimands Dill but allows him to stay. Dill and Jem sleep in Jem's room, which adjoins Scout's room. Late at night, Dill wakes Scout up and asks if he can sleep with her. He explains that his new father and his mother don't seem interested in him - they are kind to him but they don't need him around, they'd rather spend time alone together. ...read more.

The courtroom is packed but everyone is silent and still, and Scout feels the sensation of chilliness in the room. Finally the jury returns and Judge Taylor polls the jury. Every jury member declares Tom guilty. Atticus whispers something to Tom, then exits the courtroom. All the black people in the balcony rise to their feet to honor him. Analysis Jem was sure that the trial would go in Tom's favor after the evidence came out about his left arm. The pronouncement of guilt therefore comes as a complete surprise to his na�ve mind, and he feels each jury-member's "guilty" verdict like a physical feeling of pain. He is in fact psychologically wounded by the results of the trial, feeling that his previously good opinion of the people of Maycomb (and people in general) has been seriously marred. His trust in the rationality of the people has been beset by the knowledge that people can act in irrationally evil ways. He will find himself struggling to conceive of how otherwise good people can behave in such ugly ways for the rest of the book and beyond. Despite the unfavorable verdict, the tribute which the black community pays to Atticus shows that he has achieved, through the way he handled the trial, a worthwhile lesson for the townspeople by exposing the unfairness of their collective opinions. Just as he fathers Jem and Scout in good moral virtues, he seems to be trying to teach the town a lesson and infuse them with more virtuous ideas. Chapter 22 Summary Jem is crying and angry - he thought that the case was clearly in Tom's favor. Atticus is exhausted and when Jem asks him how the jury could have done it he responds, "I don't know, but they did it. They've done it before and they did it tonight and they'll do it again and when they do it - seems like only children weep." ...read more.

Boo doesn't say a word, just nods when she asks if he'd like to do so. Scout shows Boo how to gently stroke Jem's hair. Then she perceives that he wants to leave, and she leads him to the porch, where he asks her in a near-whisper, "Will you take me home?" She leads him home and he goes inside his house and shuts the door. The narrator, speaking as an older Scout, says she never saw him again. Scout imagines the years that went by and how Boo watched over "his" children. Back home, Scout sits with Atticus, who begins to read her one of the scary children's stories he has picked up to read. Scout says she wasn't scared by the events tonight, saying that "nothing's really scary �cept in books." She is talking about a book character who was chased and caught and then found to be innocent and "real nice." Atticus says that "most people are, when you finally see them." Analysis Scout finally acts the part of the hospitable Southern lady in assisting Boo around the house and seeing him home; she interacts with him in a serious and grown-up fashion. Though she runs to tell Jem when she first discovers Boo is in their house, she reacts against this childish reflex and gives Boo his privacy very tactfully. She has learned how to be a guide for others, as shown by her symbolic act of leading Boo to safety. She can visualize things from his perspective now, as Atticus once advised her to do, and she observes the years go by from his perspective, seeing herself and Jem and Dill through new eyes; also neatly summarizing the events of the book. Scout shows that even though she has discovered that people can be evil in unfathomable ways, she still upholds her faith in humankind and can face anything with courage. Unlike Dill, she finds that the real world does follow patterns, and once one knows them, the world of fantasy and books is the only place where real fear can exist. ...read more.