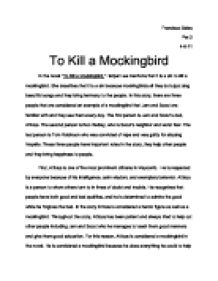 Francisco Salas Per.3 4-6-11 To Kill a Mockingbird In the novel "To Kill a Mockingbird," Harper Lee mentions that it is a sin to kill a mockingbird. She describes that it is a sin because mockingbirds all they do is just sing beautiful songs and they bring harmony to the people. In this story, there are three people that are considered an example of a mockingbird that Jem and Scout are familiar with and they see them every day. The first person is Jem and Scout's dad, Atticus. The second person is Boo Radley, who is Scout's neighbor and worst fear. The last person is Tom Robinson who was convicted of r**e and was guilty for abusing Mayella. These three people have important roles in the story, they help other people and they bring happiness to people. First, Atticus is one of the most prominent citizens in Maycomb. He is respected by everyone because of his intelligence, calm wisdom, and exemplary behavior. Atticus is a person to whom others turn to in times of doubt and trouble. He recognizes that people have both good and bad qualities, and he is determined to admire the good while he forgives the bad. In the story Atticus is considered a heroic figure as well as a mockingbird. Throughout the story, Atticus has been patient and always tried to help out other people including Jem and Scout who he manages to teach them good manners and give them good education. ...read more.

During his testimony, he states that he felt sorry for Mayella and so he tried to help her with things he knew to do and he didn't help her for money but helped her because Mayella didn't have anyone close to her. Tom Robinson says," No, suh, not after she offered me a nickel the first time. I was glad to do it, Mr. Ewell didn't seem to help her none, and neither did the chillun, and I knowed she didn't have no nickels to spare," (Pg. 256). This quote is important because it describes that Tom Robinson helped Mayella with her chores and all he wanted was to help her out and be kind to her. Tom didn't have the intention to r**e or abuse Mayella but she kissed him which was a mistake because it was illegal to kiss a color man. Second, Link Deas, Tom Robinson's owner, confessed to Judge Taylor that Tom never did anything bad or wrong. Link Deas said, "I just want the whole lot of you to know one thing right now. That boy's worked for me eight years an' I ain't had a speck o'trouble outa him. Not a speck," (Pg. 261). This quote is important because since 8 years, Tom has not caused any trouble to people and he had always helped other people. ...read more.

Autumn again, and Boo's children needed him," (Pg. 374). This quote is important because Boo treats Jem and Scout like him own children, he brings them joy, and he also protects him. He has never hurt them and that's why he is considered a mockingbird. Throughout the story, Boo is portrayed as a mean and dangerous person but in reality he is kind and nice even to Jem and Scout who never seem him before. Like a mockingbird, Boo always bring kindness and harmony to people and he never causes trouble to anyone. In conclusion, it is a sin to kill a mockingbird because they do nothing but create beautiful music for the enjoyment of others and to kill it would be killing an innocent creature that has tried to serve others. Also the rhythm and harmony is one thing the whole neighborhood would love to listen to. In this story, there are three main characters that are portrayed as mockingbirds because all they do is help other people and they never hurt or troubled anyone. The three main mockingbirds are Atticus, Tom Robinson, and Boo Radley. All of them have two things in common that make them mockingbirds. First, is that all they do is help others with their problems. Secondly, they all bring harmony and joy for the enjoyment of others who they interact with. The three mockingbirds make a change in Maycomb and they try to help others who need it the most and they are recognized for their actions. ...read more.